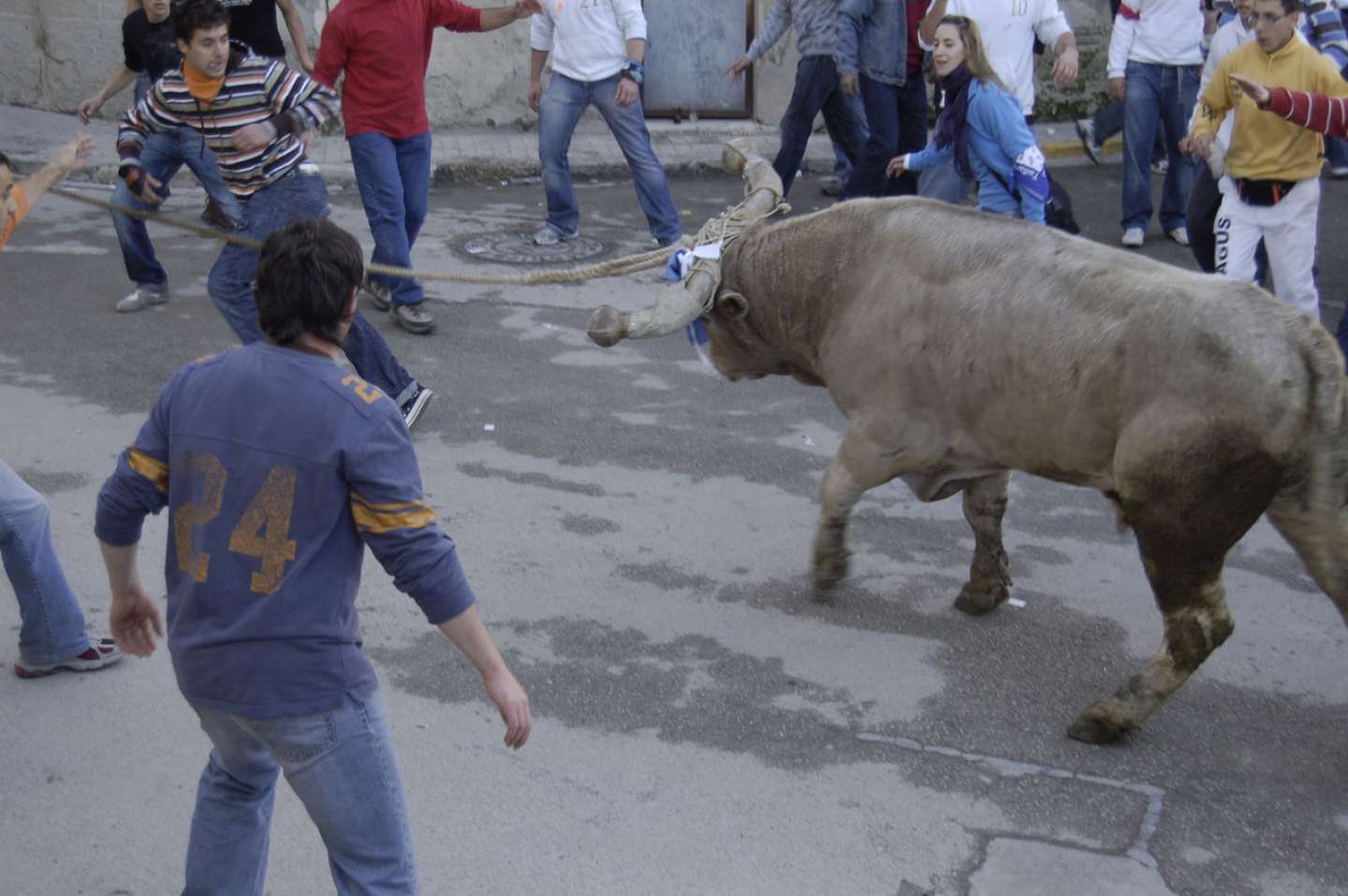 "Ok, everyone. Look at me and smile!”

I snapped a picture of Tim, Katie and Matt standing at the exact gate where the bulls would be released during the upcoming San Fermin Festival in Pamplona, Spain.

“Yes.” And thus our trek down the cobblestoned route of the famous “Running of the Bulls” began. When we planned this trip to Spain, our last for the year, we decided to make Pamplona a featured destination. Due to the large size of the country and the small size of our now severely depleted finances, we chose to stay in the North Eastern area. When we told the kids that we would get to see where the “Running of the Bulls” took place, we were greeted with blank stares. They had never heard of it. All the more reason to go, we insisted.

“Why would we do that?” Matt glance at me, appalled.

“Because that is what everyone wears. See?” I said pointing to a shop window that displayed the ceremonial dress.

“Well I’m not wearing that.”

“Matt, this is pretend.” Katie sighed.

We started up Santo Domingo St. and found it surprisingly narrow. I had a hard time imagining six angry bulls charging through here with throngs of men running nilly- willy to get out of the way. Then I wondered if perhaps some forward thinking women of ages hence had designed this course with the advancement of their local suffrage movement in mind.

Regardless of who started this whole business and why, it was thrilling to be there. To place our feet upon the same worn cobblestones that the bulls’ hooves had echoed upon over the centuries, and to rub our palms across the scars that crisscrossed the heavy wooden barricades that had been permanently erected along the sides of some of the streets to protect the onlookers. To smell the musty aroma of the old buildings and the centuries of fear and bravado swirling through the alleys like a steady wind.

I squeezed Tim’s hand and began to expound, mostly to myself, about the excitement, the passion and the glory of ritual. How I could feel it hanging in the air like a haze. Though I was greeted with eye rolls, I couldn’t stop myself from the need to be poetic and dramatic.

We crossed the Plaza Consistorial which was much smaller than it had appeared on TV. Majestic and historic, it commanded our respect so I gave it the finest American salute I could think of. I strode to the center of the plaza and twirled around a few times, arms stretched wide like Mary Richards before she threw her hat in the air at the start of the Mary Tyler Moore show.

Soon we were making our way along Mercaders St. and took a right turn onto Estafeta St. which became even narrower. And then, suddenly, we were standing at the end which consisted of two wooden fences that form a funnel into the bull ring. From start to finish it took fifteen minutes as it was only about a half of a mile. According to the townspeople that we spoke to along the way, it takes just four minutes for the bulls to make it from one end to the other.

I used to think that this tradition was ridiculous. Every July I would see a clip on the news and wonder, “What is wrong with these people?” But travel has deepened the well from which I now draw meaning.

As a family, we are changing. We have begun to view our world from a new, less ego centric vantage point. It’s one thing to learn about humankind through a textbook, but placing our feet in the exact footsteps of other cultures has humbled us. We have been reminded that America is but one of the beautiful colors in the kaleidoscope.

Now, my reactions to such cultural events are not statements and judgments, but questions. I am once again the student rather than the teacher. I seek, in each culture, answers to deepen my understanding of what beauty is to them, what constitutes courage and valor, what instills pride and compassion.

“Let’s head over to one of those tables.” Tim pointed to an open square filled with restaurants.

“Me, too.” added Katie. “Can you order us a Coke while we check out that souvenir shop?”

Tim and I sat for long time drinking in the sights and sounds Pamplona. A band began to play at the far end of the plaza, and Katie and Matt returned with t-shirts and a key chain commemorating this event that, until today, they knew nothing about. They stood proudly and shared with us their purchases as well as the local lore that the shopkeeper revealed to them.

Tim and I exchanged knowing glances because we saw it, again, in their eyes. That spark that was becoming a regular thing now. The one born of the excitement of being a real traveler on the open road of life.

Author Susan Pohlman details her family’s transformation during a year spent in Italy within the pages of her first book, Halfway to Each Other. It was awarded WINNER in the Relationships category and RUNNER-UP in the Memoir category at The 2010 Next Generation Indie Book Awards.   It has been shortlisted for the newly established Inspy Awards.  Find it here.