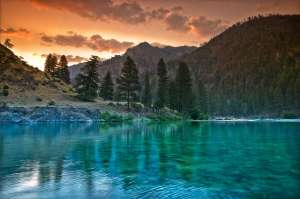 It's been more than 50 years since the creation of the Wild & Scenic Rivers Act, which protects more than 12,000 miles of pristine waterways.

Here are five places where you and your family can relish the natural beauty of our nation’s rivers. 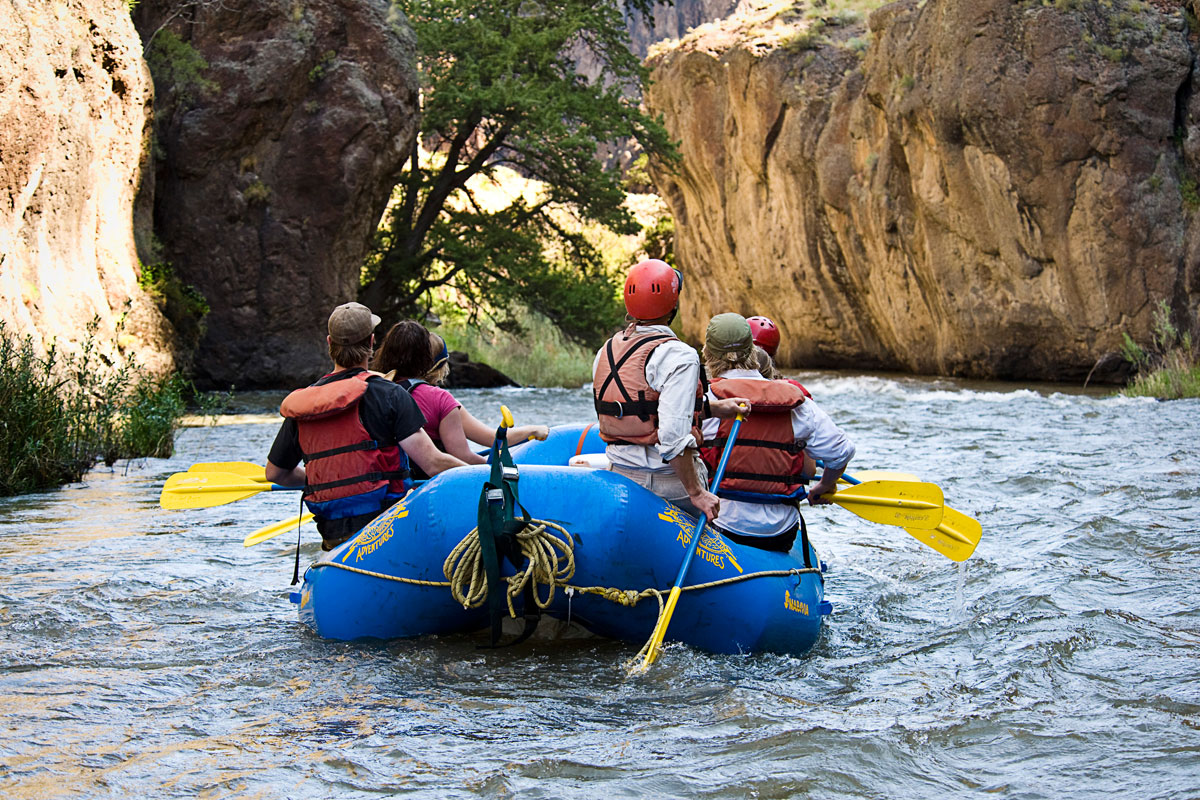 Middle Fork of the Salmon, Idaho.

Find your way to Idaho’s Frank Church Wilderness and commit to an unplugged week on the Middle Fork of the Salmon. As you float, fish, and splash through 100 miles of spectacular scenery you’ll be treated to unexpected luxuries along the way. Relish the fresh air of morning as your crew delivers hot coffee or cocoa to your luxury tent. Later, warm up in a hot spring, dine on organic, seasonal specialties and plan for the next day’s adventure under a starry sky. Contact:

This Wild and Scenic River forms the southern boundary of this 800,000-acre playground. It’s the only Park in the United States that hosts a complete mountain range – the Chisos. With older children in tow, soak in the Park’s scenery as well as the warm water offered by a resident hot spring. On the northern riverbank, steamy water fills the foundation of an old bathhouse, creating a popular natural hot tub. Nearby, look for painted pictographs on the cliff walls as you enjoy a one-mile loop hike past historic buildings and the area where various Indian groups lived and traveled.

Float through 40 miles of scenic Southwestern Oregon and you’ll explore the same rugged country that drew Native Americans, trappers and prospectors for centuries. Stay in the raft or up the adrenalin ante by running the rapids in an inflatable kayak. Designated a “Wild & Scenic” wilderness area, you and your family will paddle through the Siskiyou Mountains and the Rogue River National Forest. Also possible are adventures that include hiking and gourmet dining options. 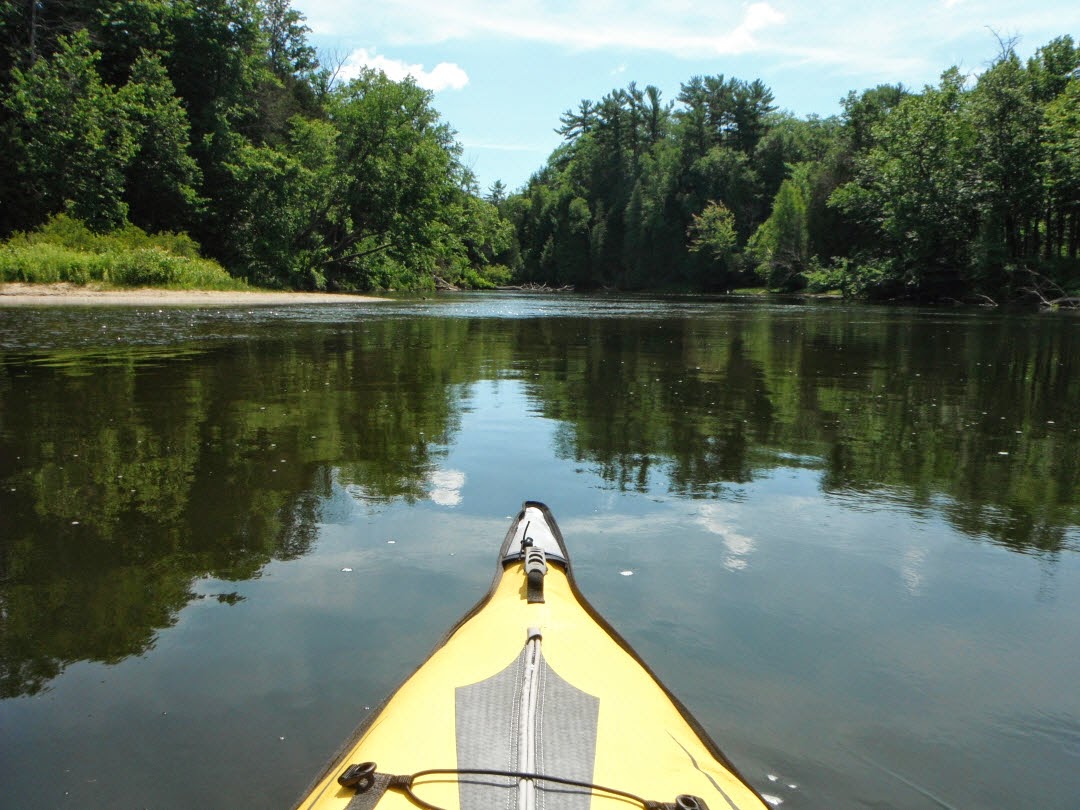 Au Sable, Wellston, MI. Introduce your family to the joys of fly-fishing in the north woods of Michigan. The scenic and diverse Au Sable River originates north of Grayling and winds for more than 100 miles before meeting Lake Huron

A fly-fishing only section of the river flows past Burton’s Landing and is known as the “Holy Water” for its productive riffles and trout filled pools. Team up with a local outfitter for instruction designed for young anglers.

Located in the northern Front Range and dubbed thePoudre” by local residents and longtime visitors, the main and south forks of the Cache la Poudre River, originate in Rocky Mountain National Park and flow north and east through the Roosevelt National Forest before eventually passing through Fort Collins.

You can explore the region via the Cache la Poudre – North Park Scenic Byway. Beginning in Fort Collins, it follows the river and the route used by settlers to connect Colorado’s northern plains to the Green River settlement in Utah. 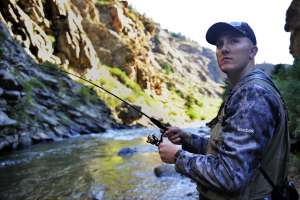 Today I was reminded why they call one of my favorite sports “fishing”.

It was a beautiful day in the Vail Valley and my son Alex and I headed out for a morning of “Walk and Wade” fly-fishing with a guide from Gore Creek Fly Fishermen.

An Eddy In TIme

Fly rod in hand, I eased into the warm waters of the storied Madison River. My son, Ben, was just steps behind me, eager to wet his line. Despite my felt-bottomed shoes, I faltered slightly, slipping off the rounded, moss-covered rocks below my feet.

Steadied by his strength, together we pushed forward, bolstered against the rippling current.

At 6'3", my oldest son towers over me now. This should come as no surprise. Mothers with children older than mine had long presaged it would happen like this; a fast-forward blur of growth spurts, sporting events, back-to-school nights and prom dates.

But, really, wasn't it just yesterday that I took his small hand in mine and walked him into pre-school? And just last week that I steadied him on skis as he slipped down a snowy pathway during a family ski holiday?

And now, some 20 years later, he is holding me upright as we wade into these braided waters under the wide Montana sky.

This was more than a casual weekend. He had called to suggest we meet for a few days of mother-son fly-fishing, an interest we have shared since his boyhood. Our destination would be the mountains and rivers of Big Sky country, a landscape we both love. After, we would both head to Northern Idaho for the big event. In just seven days, he would wait at the end of yet another pathway, to catch that first glimpse of his beautiful bride.

Throughout the weekend, we fished favorite streams and crossed canyons via zip line, joking about the next "big leap" he would soon take. We walked through the woods with his two Golden Retrievers, Bridger and Jackson, and reminisced about our family life. We both ordered curried chicken for lunch and lamented our mutual metabolism that required us to leave the banana bread at the counter. Particularly now, the weekend before the wedding.

I wondered if there wasn't something important, meaningful I should say. Some kind of pre-nuptial, motherly advice I could offer. But it wasn't required.

Someone asked if I felt that sense of loss some women suffer; a heart-splitting notion that marriage somehow meant losing your son to another woman. For us, there is none of that. I know that I will always be his mom and she will always be his girl.

Each evening we retreated to our room at the Big Sky Lodge, curled up with the dogs, reviewed the days' events and planned for the next. We shared our individual enthusiasm for the upcoming wedding festivities. I smiled with deep pleasure when he spoke with confidence of his decision to marry Lyndsay and how special and strong he believed their relationship to be. There was no hesitation. Only eager anticipation.

From time to time, I would catch glimpses of a much younger Ben. A familiar, silly grin. A childlike glance in a moment of indecision. But mostly, I saw a sure-footed man, eager to embark on this next chapter of his life.

On our last afternoon, we made one more stop along the Gallatin, hoping to improve our luck. While we both knew this weekend wasn't just about the fish, a little more action would have been welcome. Once again, Ben provided a steady hand as we waded into the water. As the sun dropped behind the cliff and soft evening light prevailed, we took turns casting, attempting to lure the wily trout from its safe hideout.

At one point, my line became hopelessly entangled. Without hesitation or frustration Ben quietly took my rod and said, "Not to worry. I can help." It's what I might have whispered two decades ago when he fell off the jungle gym or scraped his knee in a roller blade spill. But now, somehow it seemed just right that he would be the problem solver, the one to take the lead.

As the weekend came to a close, he said, "Mom, your baby boy is getting married. Can you believe it? "

What I believe is that time mysteriously evaporates and in the blink of an eye, that once mischievous toddler strides back into the room as a confident, young man. A man insightful and caring enough to create this eddy in time, in the scant hours before dozens of friends, family and a long list of last-minute details, would vie for his attention.

Knowing he has become this measure of a man provides soul-satisfying comfort. I am certain he will be a fine husband and father, locking arms with his wife through rough waters and calm seas. He'll be present when their child takes that first shaky step, hesitates on the first day of school or ties the first fly.

And with this knowing, I will shed tears of pride and joy as he reaches for the hand of his lovely bride, closes his own around hers, and before family and friends, promises to love her and hold her steady. 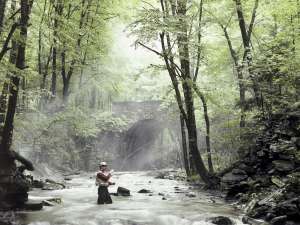 First time casters and veteran anglers enjoy the natural places that enable a fly fishing vacation. Test your tippet deep in the wilderness or perfect your back casts on the resort lawn.

Gather your gear. Then enjoy the beauty and art of fly fishing:

LL Bean Outdoor Discovery School. Freeport, ME or Columbia, MD. The knowledgeable instructors at LL Bean can jump start your family into the wonderful world of fly fishing with their one or two-day introductory courses.  You’ll learn about fly-tackle, delve into knot tying, fly tying, and fish-food identification, then move outside to practice casting skills in a nearby pond.  Continue the analysis and improvement at home once you’ve viewed their video of your newly acquired skill. Contact:  LL Bean experts are available for fishing advice on their hotline between 8 a.m. and 10 p.m EST every day; 1-800-347-4552.  For class registration:  (888)-552-3261); www.llbean.com

Painting the picture. Nye, Montana. If not casting color onto a canvas, Tom Wolfe can be found throwing a line streamside somewhere in the Montana backcountry. Mixing his love of painting with a passion for wild places, Wolfe paints through the winter in his log cabin tucked in the Absaroka foothills. Then, when spring melts into summer, he happily leads week- long pack trips or day excursions into to some of the best trout fishing water in America. When not teaching the kids how to tie a fly, he might be working on a watercolor of your family’s high altitude adventure. Contact: 406-328-4694: www.TomWolfeArt.com.

Chetola Resort. Blowing Rock, NC. The only Orvis-endorsed fly-fishing lodge in North Carolina has plenty to offer the entire family. Pack a rod for a half day trip to “The Refuge” on Boone Fork Creek, a destination deemed ideal for beginners and families.  When not casting a line, check out the children’s camp, a heated indoor pool, fitness center and nearby rafting and golf. Contact: (800) 243-8652;  www.Chetola.com.

Match the Hatch. Livingston, MT. Spend a day on the Yellowstone River with Eric Adams and your family members will go home with more than basic casting skills. His educational background in ecology means you’ll learn to “match the hatch”, fish pocket water from a raft and how to maximize a day on the famed Yellowstone River or nearby spring creeks. You are sure to enjoy time on the Yellowstone, the longest stretch of blue-ribbon trout habitat in the nation.  Contact: 406.223.2488; www.MontanaFlyFishingGuides.com

Fishing on the Farm.  Blackberry Farm, Walland, TN. With two ponds and a stream on site,  plus more than 700 miles of fishable trout streams in the neighboring Great Smoky Mountain National Park, this gem of a property offers the novice or experienced fly fishing family the opportunity to enjoy great water as well as a sea of additional activities. Horseback riding, mountain biking, cooking schools, the Farmhouse Spa and charming accommodations on 4,200 pastoral acres, combine to create a picturesque haven for a gathering clan. Contact: (800) 648-4252; www.BlackberryFarm.com.