This July will mark 50 years since the historic Apollo 11 mission launched for its journey to the Moon from LC-39 at Kennedy Space Center. Visitors from around the globe will be able to relive the experience at the Kennedy Space Center Visitor Complex, through a series of events and celebrations designed to commemorate the anniversaries of the launch, journey and landing.

The Apollo/Saturn V Center, offering an exploration of the Apollo Program from the days leading up to the first launch to the Moon landings that followed, will unveil new upgrades, exhibits and experiences on July 15.

Guests will immerse themselves in the stories and history that describe the moments that changed the future of space exploration forever, all surrounding an actual Saturn V rocket. Enhancements include a closer look at Lunar Module 9, projection mapping on the side of the Saturn V rocket, a 1969 period living room and bar scene that recreate what it was like to watch the Moon landing, a Moon Tree Garden made up of trees grown from seeds that orbited the Moon, a Fisher Space Pen legacy display, a closer look at the Command and Service Module 119, and more. The Apollo/Saturn V Center remains open during these updates, but guests may be subject to Moon dust during the process.

On July 16 at exactly 9:32 a.m., guests will be able to relive the excitement of watching Apollo 11 lift off. A “flashback” event will take visitors through the launch sequence in real time by showcasing original footage at the Banana Creek viewing area, which offers an amazing view of the launch pad that Apollo 11 lifted off from 50 years ago. Before and after, guests will enjoy breakfast and other refreshments, have the chance to experience the Apollo/Saturn V Center, and be enlightened by expert commentary, astronaut interviews and more.

During a special “Moon Landing” event on July 20, Kennedy Space Center Visitor Complex will honor the Moon landing and the moment that Neil Armstrong took his first steps on the Moon 50 years ago.

After completing the monumental Apollo 11 mission, Neil Armstrong, Buzz Aldrin and Michael Collins safely splashed back into the Pacific Ocean on July 24, 1969. As the final anniversary event in the timeline of the mission, Kennedy Space Center Visitor Complex will host “Splashdown” in the Rocket Garden on July 24.

You can stay up to date on Kennedy Space Center Visitor Complex’s plans to commemorate the 50th anniversary of Apollo 11, here link. 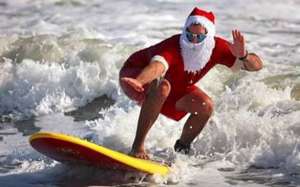 Did you know that one of Santa’s favorite pastimes is actually surfing?

Floridian’s were the first to uncover St. Nick’s secret, which is why, each Christmas Eve, Cocoa Beach (the Surfing Capital of the East Coast) hosts its annual Surfing Santas event.

This fun and free event has proven to be a big attraction (and photo opp!), pulling in more than 800 Santas and 10,000 spectators annually. It gets better though - Surfing Santas has also raised more than $60K for local charities, most notably The Florida Surf Museum and Grind for Life. 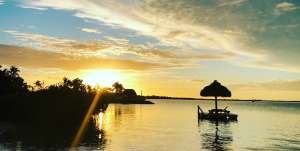 You’ll find Key Largo nestled between the watery wilderness of the Everglades National Park to the west and the fish-rich coral formations of North America's only living coral barrier reef to the east.

Six miles offshore in the Florida Keys National Marine Sanctuary you will find the wreck of the Spiegel Grove, a 510-foot former US Navy ship intentionally scuttled in 2002 as the backbone for a new coral reef.

Locals consider their home the Diving Capital of the World and it is a great snorkeling spot, but the island is nearly as famous as a sport-fishing destination.

Some of the best charter captains and fishing guides in the world work out of Key Largo.  Hire a guide and sailfish offshore, bonefish along the Atlantic shallows, or redfish and tarpon in Florida Bay.

Key Largo's proximity to the Everglades makes it a premier family vacation destination for kayakers, birders and other eco-tourists. All this beauty, not to mention the island's rich history, has inspired a vibrant community of artists who show their work at several local galleries.

When the day is done, you can trade stories at any of a full-range of restaurants, bars, hotels, motels and resorts. Each is as unique as Key Largo itself.