But what about the Winter Olympics (you know, this year, the ones in PyeongChang)? You’ve heard of them, right? Back in 2002, Snowbasin hosted the downhill, super-G, and combined events for the Salt Lake City games.

Powder and Snowbasin are, as my dad likes to say, two peas in a pod because they’re in the same valley. But they are very different peas. One is more corporate, the other counter-culture. They look different and feel different, but they have the same sublime snow, plus Utah’s legendary outdoorsy vibe.

Looking for Powder Mountain and Snowbasin

If you can find them, that is. It’s a challenge for these resorts to compete with the flashier Park City area mountains. They’re not as close to Salt Lake City and they don’t have the million-dollar marketing budgets. This lack of hype could lead you to believe you’re in the middle of nowhere, when, in fact, you’re somewhere really special.

Which pretty much describes how I felt when we checked into our little place overlooking the Pineview Reservoir in Huntsville, Utah, about halfway between Snowbasin and Powder Mountain. It was surrounded by snowcapped mountains and seemed almost desolate, even though we were here at the height of ski season.

Of course, “Where are we?” also applied to our lives. When you’re constantly on the move, you wake up on some mornings and ask yourself, “Which state am I in, again?” Then you look out the window and see mountains and snow, and you say, “Oh, Utah.” You can’t quite see Powder Mountain — or “PowMow” as the locals call it — from our place. The resort is accessible from nearby Eden by a narrow, winding road. A sign ominously warns motorists that chains are “required” during ski season, but on the day we drove up to PowMow, the roads were completely clear.

By the way, it’s true that this has been one of the worst ski seasons in memory as far as snow goes. No matter where we’ve visited — Colorado’s Wolf Creek, Purgatory, Crested Butte or Eldora — the snow has been uniformly disappointing. I wondered what a place that modestly calls itself Powder Mountain might be able to offer.

More than I thought, it turns out. Powder Mountain is enormous, but it also keeps its snow like a reservoir holds water. It breaks ski resort traditions in many ways. First, you drive up to the base and then ski down, like Snowshoe Mountain in West Virginia. It also emphasizes quality over quantity, limiting lift ticket sales to 1,500 per day. This, the resort promises, ensures the lowest skier density of any major ski resort in North America.

PowMow’s runs are broad and gentle. Even the black diamond slopes — the most difficult ones — have a bluish tint, meaning they are not heart-stoppingly scary. Also, the average skier is, as my middle son would say, a dude. I’m talking jeans, last decade’s snowboard, long beard, and a headset playing the Grateful Dead. PowMow’s unofficial, somewhat revolutionary motto is “Powder to the People.”

And here’s something else you normally won’t find at an American ski resort: A snowcat, the kind used for grooming slopes, utilized instead to transport skiers from one ridge to another.

I didn’t have to imagine what this place would be like with good snow, because Powder Mountain had the best snow I’ve skied on all year. That’s what you get when you create a ski resort at the top of the Wasatch Mountain Range. Lots and lots of snow that sticks to the ground when everyone else has gone to the beach.

On the fixed-grip chairlift, a guy from Houston told us about the last powder day at PowMow, and I could swear those were tears in his eyes. Here, the snow is something like a religion.

Snowbasin may share a valley with PowMow, but in many ways, feels like it’s on another continent. Sure, the snow is still great (I base this on two visits, one in February and the other in late March). But the slopes here are a little more serious.

There are two Olympic downhill runs. Have you ever stood at the top of a downhill run? Just take the Allen Peak Tram to the top and take a peek down Grizzly, the start of the men’s downhill course. It starts with a wall of snow that you basically plunge down, reaching speeds of 70 miles per hour. Even the slightest miscalculation can send you careening off the slope and to to the hospital. I made careful turns down that black-diamond slope until I reached the bottom.

Speaking of Olympics, Salt Lake City is making a bid for the 2030 games, which has the folks at Snowbasin excited. They can already envision the athletes coming back to the top of Allen Peak and competing again. That would be something.

Snowbasin is known for two other things: First, its base lodge is among the nicest in the west. It looks more like one of those upscale ranches in Wyoming than a ski lodge, with soaring ceilings, 360-degree fireplaces and gourmet food. And second — and this may come as a surprise — it offers some of the longest and most family-friendly runs I’ve ever been on. Try Elk Ridge, accessible from the Strawberry Gondola, for some pure carving pleasure.

Ah, and the views! Both Snowbasin and Powder Mountain have incredible vistas of the reservoir or of Ogden and Salt Lake City. But on a clear day, from the top of the Allen Peak, it’s said that you can see all the way to Colorado, Idaho, Nevada and Wyoming.

I’m glad we landed here now, as the Olympics are underway. I can’t think of a more perfect time, or place.

You can read more about Christopher Elliott's family travel adventures at Away Is Home.

Why Crested Butte is Colorado's Most Serious Ski Resort 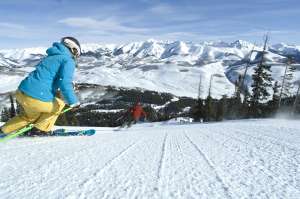 The mountain's almost-vertical, double black diamond runs, most of them accessible from a T-bar lift, are in a class by themselves. (A T-bar? Haven't seen one of those in years.) These slopes will put the fear of God in you even if you're a lifelong skier. 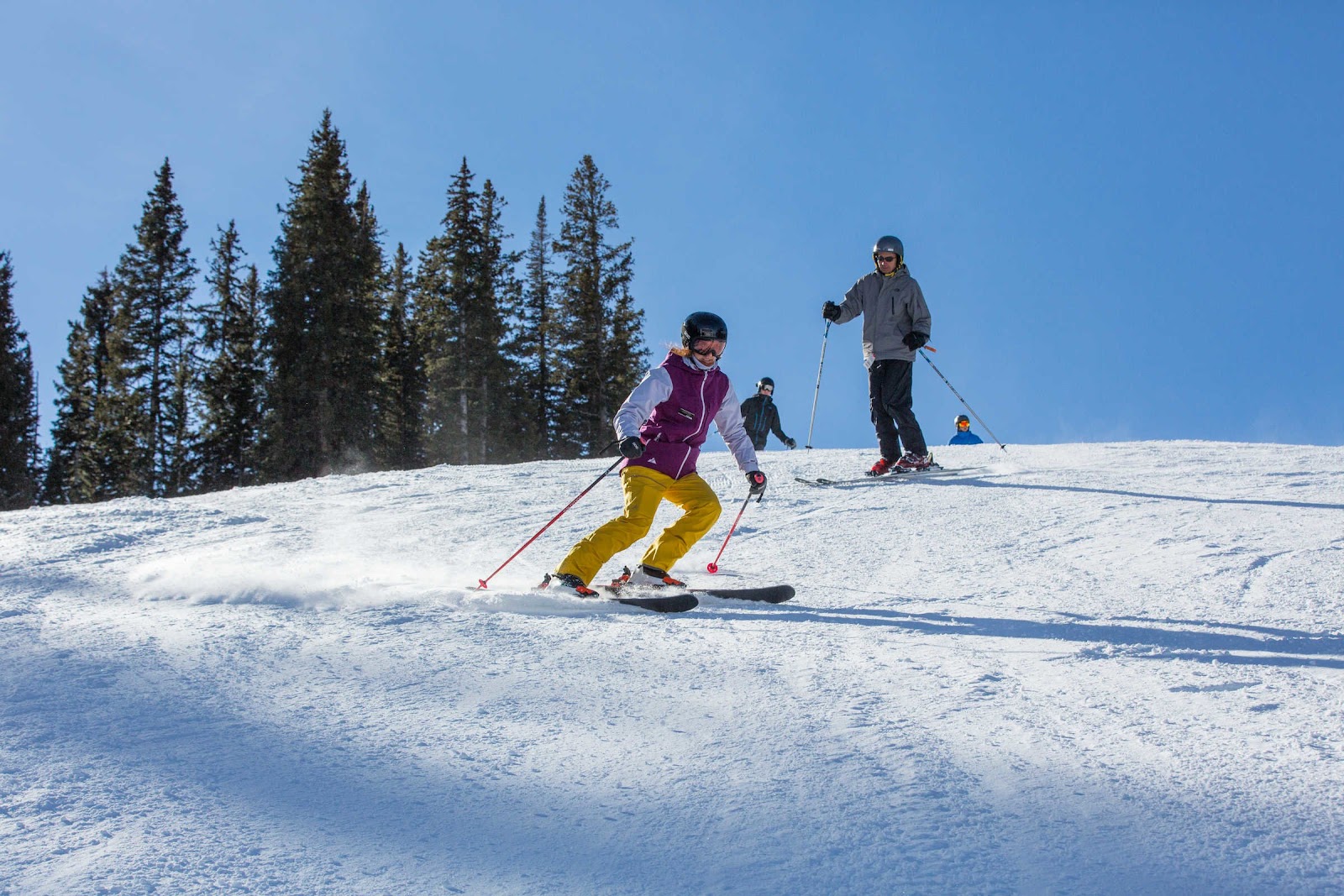 And yet, the fun is serious, too. A series of much more forgiving blue and green runs are available for your kids, and there's no shortage of things to do in town, none of which involve you staring into a snowy abyss. 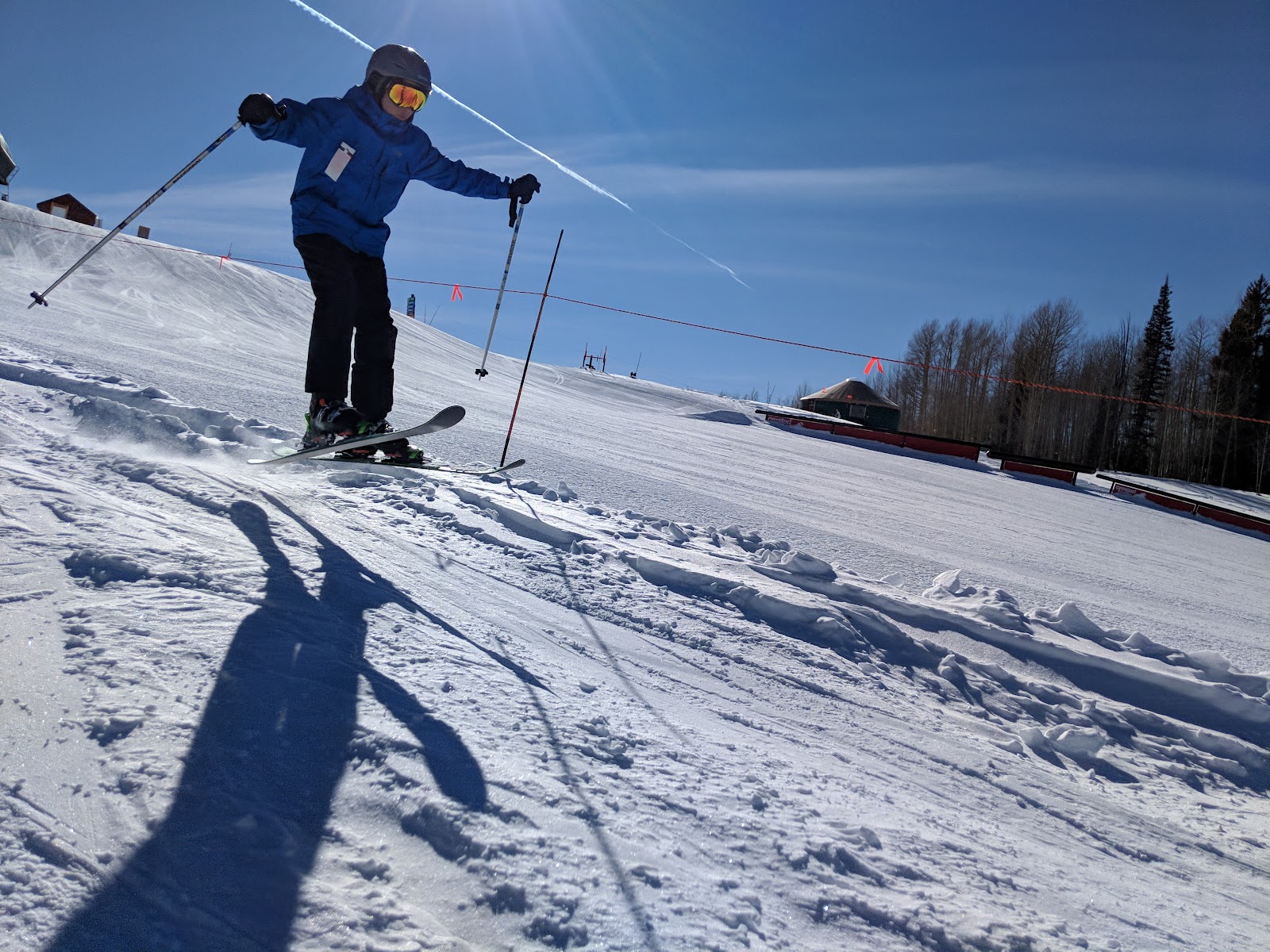 "I'm not going there"

Although Crested Butte is only a few miles over Italian Mountain from Aspen, Colorado's most high-profile ski area, it might as well be on a different planet. People don't come here to be seen, and there are no paparazzi tracking the few celebs who venture over the hill.

Instead, everyone is here to ski.

As soon as we picked up our lift tickets, we headed straight to the mountain.

We'd already skied two resorts in Southern Colorado, some of which presented us with challenging terrain. But this was different. Really different. After a warm-up run on the Red Lady Express, which has a lot of mellow runs perfect for families, we headed over to the Silver Queen Express, a quad that services some of Crested Butte's steepest terrain.

The last few hundred feet of Silver Queen are almost pure vertical, and you get the sense that coming down might be a chayllenge.

Skiing down Triangle, a single black diamond run, demanded our full attention. But after a fresh snowfall, the mountain face was manageable. Then my middle son, Iden, made a turn and headed for the trees -- rated the most difficult terrain -- lured by ungroomed boulder-size moguls and cliff-like steepness, and ...

"I'm not going down there," his older brother declared.

Fortunately, you can change your mind and live to tell the tale. We pivoted on our skis and came down International, another black diamond run. 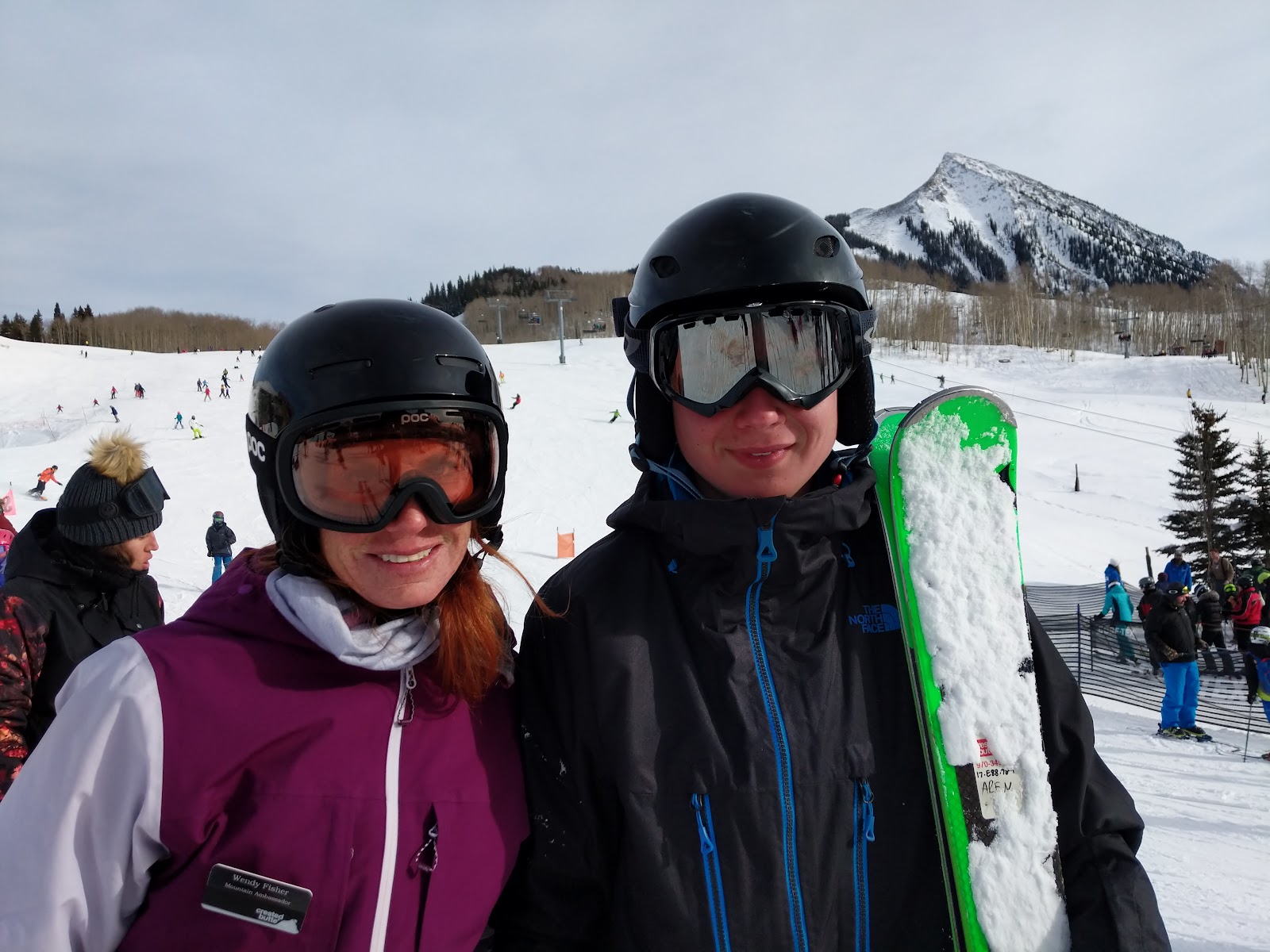 The next day we met up with Wendy Fisher, a former Olympic athlete and X-Games competitor who offers ski clinics to people who might find the mountain a little intimidating. Yeah, that would be us.

After just one trip down an easy run, Fisher diagnosed our problem: We were leaning too far back on our skis, which tires you out quickly and limits your ability to control your skis, especially on the steeps.

Fisher is part mountain guide, part storyteller, part instructor. She has an encyclopedic knowledge of Crested Butte, is happy to regale you with stories of the 1992 Winter Olympics, and is eager to offer tips on improving your form. Iden, the fastest skier in our group, learned how to regain control even when zipping down the hill. Fisher showed Aren, our most cautious skier, how to relax a little and enjoy his runs.

And me? Well, I had years and years of bad habits to overcome. I tend to ski with both my legs glued together. In German, it's called "wedeln." Fisher showed me how to trust my equipment, keep my legs apart, and let gravity do more of the work.

Thanks to Fisher, we spent the next few days skiing every open run -- yep, even those seriously hard black diamonds. Thanks, Wendy. 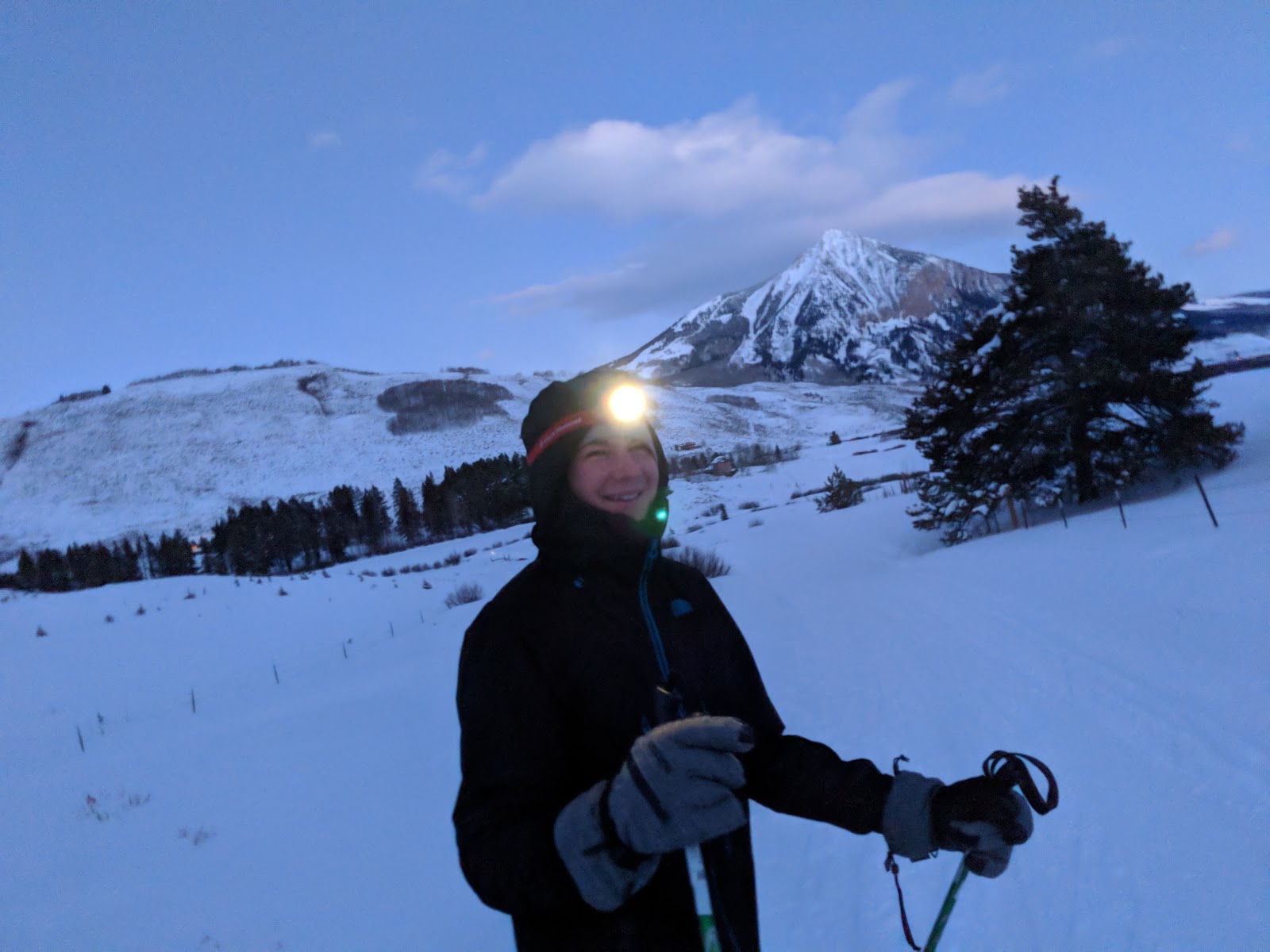 There's much more to Crested Butte than its legendary slopes. After two days of intense skiing, we got off the mountain and headed into town. We met up with Nel Burkett, curator of the Crested Butte Heritage Museum, who took us on a walk through the historic downtown and then offered a brief tour of the museum. It's funny, but when I asked the kids what they remembered, they said, "That's the town where all the buildings burned down." True, more than a few buildings on the tour had burned to the ground at some point in history.

Crested Butte has a fascinating history as a coal mining town and a center for environmental activism, and there's still an interesting mix of money and idealism here. You can find impressive, million-dollar mansions in the hills, but you can also run into a few old-timers who live more modestly. And you can visit shops and hole-in-the-wall restaurants that remind you more of a college town like Berkeley, Calif.

Speaking of restaurants, there are more than a few tasty choices here. Our favorites included Teocalli Tamale, with its generous burritos and a library of palate-blowing hot sauces. And there's Secret Stash, which claims to have the best pizza in the world. Who am I to disagree? For a more formal dining experience, try the Magic Meadows Yurt, which involves a brisk snowshoe walk through the woods to a backcountry cabin heated by a wood-burning stove, with live music and a five-course meal prepared by a private chef.

At the end of the day, we always found ourselves out in the snow and cold. Crested Butte is one of the coolest places in Colorado, thanks to high mountains that pull freezing air into the valley. On a clear, subzero night, trudging through the fresh powder, we looked up and marveled at a thousand stars bracketed by dark mountains.

Crested Butte may be a serious resort, but at that moment I couldn't wipe the grin off my face. I think it was frozen in place.