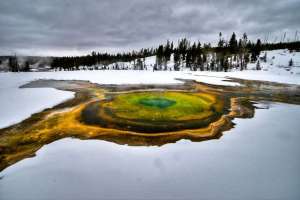 What's this about a super volcano turning the roads inside our treasured national park into a "soupy mess"?

Park officials once closed a 3.3 mile long stretch of Firehole Lake Drive because the pavement has become too soft for vehicle traffic.

A spokesperson for the park explained that Yellowstone, our first national park, sits on top of the caldera of an ancient super volcano. That's the source of the heat that spews steam from geysers like Old Faithful. That same heat has melted roadways. In fact, geologists recently discovered that the volcano was more than twice as large as previously determined.

Established in 1872, Yellowstone is the wonderous home to grizzly bears, wolves, and herds of bison and elk. It is the core of one of the last, nearly intact, natural ecosystems in the Earth’s temperate zone.

Visitors can find travel and other Park updates here.