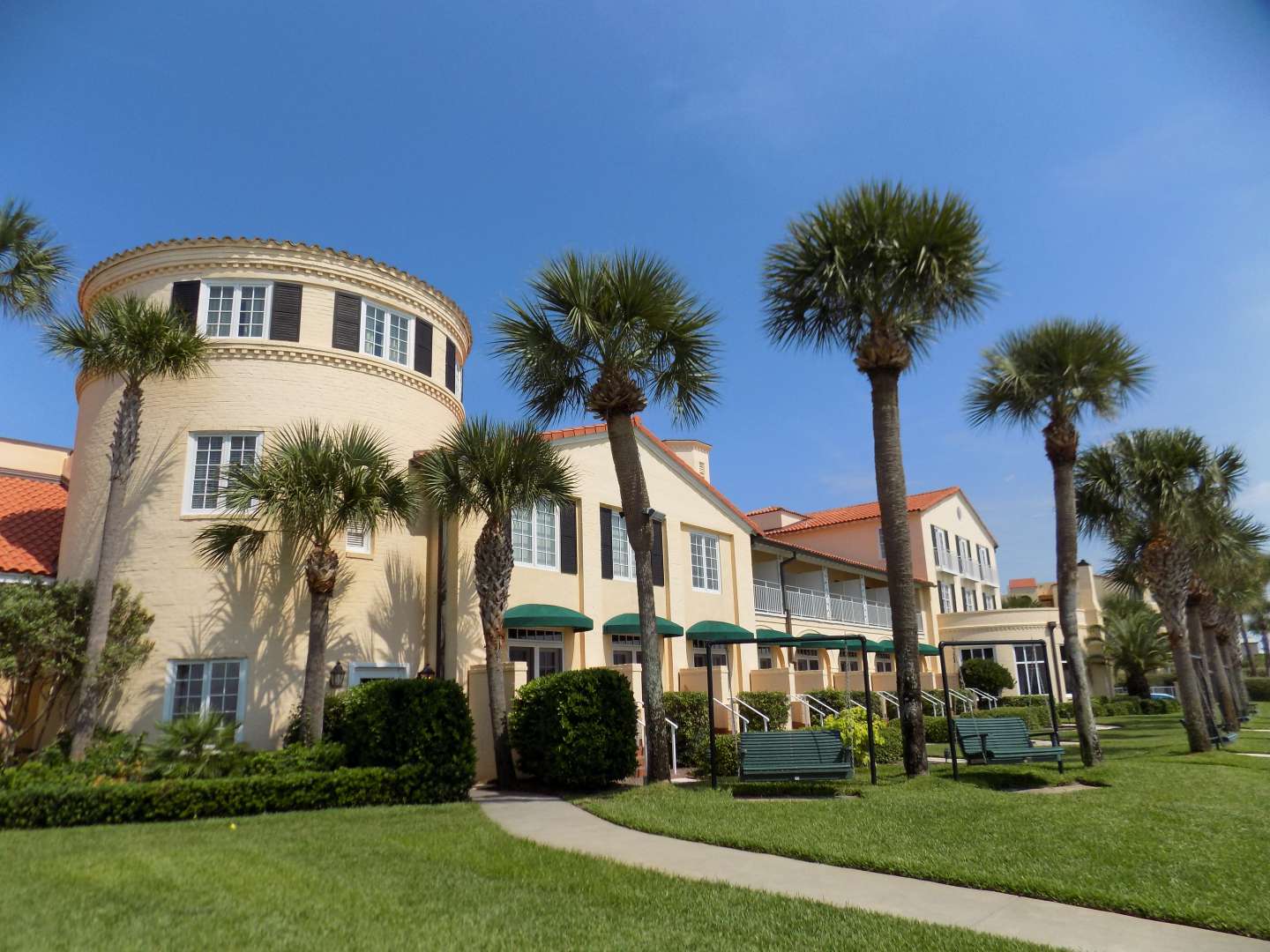 In the Owens-Thomas House, one of the great, historic homes in Savannah, a tour of the 1819 property begins in the slave quarters, perhaps the most interesting part of the household, because of the remnants of the “haint” blue wall and ceiling colorings, the largest example of such paint known to exist in the country.

When restorers were peeling away the many decades of construction and reconstruction to get to the base, they discovered the walls and ceiling of the rooms had originally been painted haint blue, a mix of indigo, lime and buttermilk.

This was an important discovery because the slaves, remembering their African history, knew that evil spirits, called hinques, could be kept away by barriers of water. So, they re-created such barriers using haint blue pigment, which the African slaves believed had the same spiritual qualities as basic water. 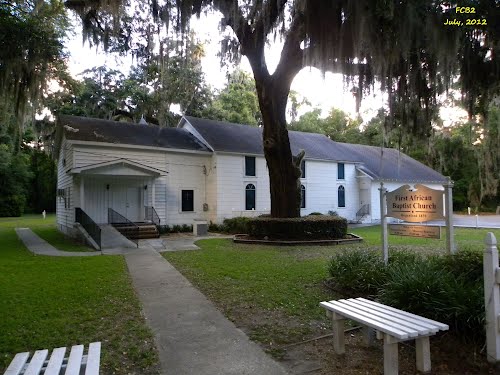 On St. Simons Island, about a 90 minute drive south of Savannah, try to find the First African Baptist Church, built in1869 by former slaves of the area’s plantations, and to this day attended by the descendants of slaves. One of the distinctive features of the small church are the windows, which are haint blue – the congregation is still trying to keep away the evil spirits

I was told, although I didn’t attend a service to confirm, that the congregation still speaks Gullah, a creole language that preserves African linguistic and cultural references.

Resort, Relaxation and a Midwestern Discovery

I was visiting St. Simons Island, staying at the beautiful and historic King and Prince Beach & Golf Resort, expecting a couple of days of purely leisure activity, i.e., doing nothing and eating well.

The resort was located on a quiet stretch of Atlantic beach. During mid-day, when the tide had ebbed, I could look out at the ocean and see sandbars in the shallow waters. In the evening, the sandbars disappeared and so did the beach, as the strong incoming tide arrived with  waves crashing at the gates of the property.

Watching the tide was the most activity I wanted to experience – other than eating!

I had heard the resort had brought in a new executive chef, Jason Brumfiel, an American who had honed his craft in England, and was intent on shaking up the menu – mixing the  Southern tradition of the hotel kitchen with more international creations. And quite frankly, he had me at my first lunch, a delectable crab-mac-cheese that was much more complicated than the simple name implies.

I thought I was going to be settled in at the King and Prince, eating and lounging away, but the hotel had arranged a trolley tour of the island – and there went my respite. For a place as small as St. Simons Island, only 12 miles long and three miles wide, it had a long and fascinating history from pre-Revolutionary War days right up through the World War II.

Part of it all was the King and Prince itself, which had started out in 1935 as a seaside dance club, but in 1941 with the addition of guest rooms became the King & Prince Hotel. The change came just in time for the onset of the World War II, and the U.S. Navy took over the property for war time training, coast watching and housing British experts in the new but arcane science of radar.

If I didn’t spend all my waking or comatose hours at the King and Prince during my three days there, it’s actually the resort’s fault because it arranged for me to take a tour of the island with a new company, Saint Simons Colonial Trolley Tours that had just bought its first vehicle.

The owners, a Midwesterner and his father-in-law, who was a transplanted local, decided running a trolley service would be a fun thing to do. On my day on the trolley, the Midwesterner, was just gearing up for the summer season, and was uncharacteristically bubbling over with enthusiasm.

There’s a lot to see on this tour – two hours worth of crisscrossing the island, but what caught my interest was post-Civil War emancipation, which continued to affect life and progress on the island.

At one time, 14 plantations (mostly growing cotton) covered the island and there are still slave quarter ruins or in one case, a slave quarter building that has been rehabbed for mercantile purposes, still standing in places on the island. The slaves working the plantations were treated as badly as elsewhere except for some noticeable benevolence. One plantation called Retreat had a slave hospital.

The hospital was conceived by Anna Matilda who married Thomas Butler King, the owner of Retreat Plantation. After the Civil War, the Retreat Plantation withered away, but the property remained in the King family until in 1926, when it was sold to the Sea Island Company. The majestic road to Retreat, lined with old oaks, can still be seen on the grounds of the Seal Island golf course. So, serenely beautiful is the line of oaks, couples often get married in the shade of the trees. I liked it so much I went to the local bicycle rental shop, got myself a cruiser with the big wide handlebars and rode my way back to the oaks so I could get a few pictures. On St. Simons Island, you might find yourself on Neptune Road or at Neptune Park. The word Neptune had nothing to do with the Roman God, but was the name of a slave owned by the King family of Retreat Plantation. He was Neptune as a slave, but Neptune Small as a Freedman.

The reason he is so remembered on the island was because of his dedication. When the Civil War broke out, he accompanied Captain Lord King into service until the captain’s death at the Battle of Fredericksburg. He found the captain’s body on the battlefield and took it all the way back to Georgia for burial. Then he accompanied Lord King’s younger brother with his service in the war.

As a reward, the King family gave Small some property on their plantation where he built his home. In the following decade, after Small had passed away, a portion of that well-located and now valuable property was sold to the city of St. Simons where it was turned into the park that bears his name.

Now, here’s the part of St. Simons’ history that really caught my attention and made me give up the days when I should have been relaxing at the beach or the pool. First, I had wanted to trace the history of the former slaves, which was why I ended up at the First Baptist Church, but I also wanted to see the properties that were given to the former plantation slaves.

When General William Tecumseh Sherman led the Union army through Georgia on his famous March to the Sea, he issued Special Field Orders No. 15 to provide arable land to the black Freedmen (former slaves). This was sometimes known as the 40-acres-and-a-mule policy and it specifically allocated lands in the islands south of Charleston.

On St. Simons Island, Freedmen were given property and they and their families through the generations continued to live on those lands for more than 100 years. Then came the real estate boom at the start of 2000s and developers washed ashore on St. Simons offering bundles of cash to buy out those now valuable plots of land that had been in African-American families for decades and decades.

The pressure to sell must have been intense because many families put up signs on their front yards, saying, in effect, “stay away, we are not selling out.” They were saved when the real estate market collapsed in the Great Recession.

However, with the country’s economy stabilizing, it appears the developers have returned and I noticed some of those “keep away” signs are back up on front yards.

One odd effect of the real estate boom years is that if you travel through neighborhoods in the central island, you’ll see small, old homes bordering big, new homes. In the end, a kind of neighborhood integration resulted.

Getting There: Like most tourists, I drove to St. Simons Island from Savannah, which can take 90 minutes on the Interstate, or a bit longer if you drive scenic coastal Route 17 and stop in Darien, which also boasts historic sites. www.cityofdarienga.com

Where To Stay: My wife and I stayed at the historic King and Prince Beach & Golf Resort, which sits on a quiet stretch of beach, not far from the little tourist town at St. Simons Pier. A new executive chef, Jason Brumfiel, has really livened up the menu. The property continues to renovate, with a new pool area. www.kingandprince.com

Things To Do: Two recommendations: take the Saint Simons Colonial Island Trolley Tour, which gave a great introduction to the island (www.saintsimonstrolley.com); and to get a little closer to things, rent a bike or kayak at Ocean Motion Surf Co. (www.stsimonkayaking.com).

Published in Resorts
Tagged under