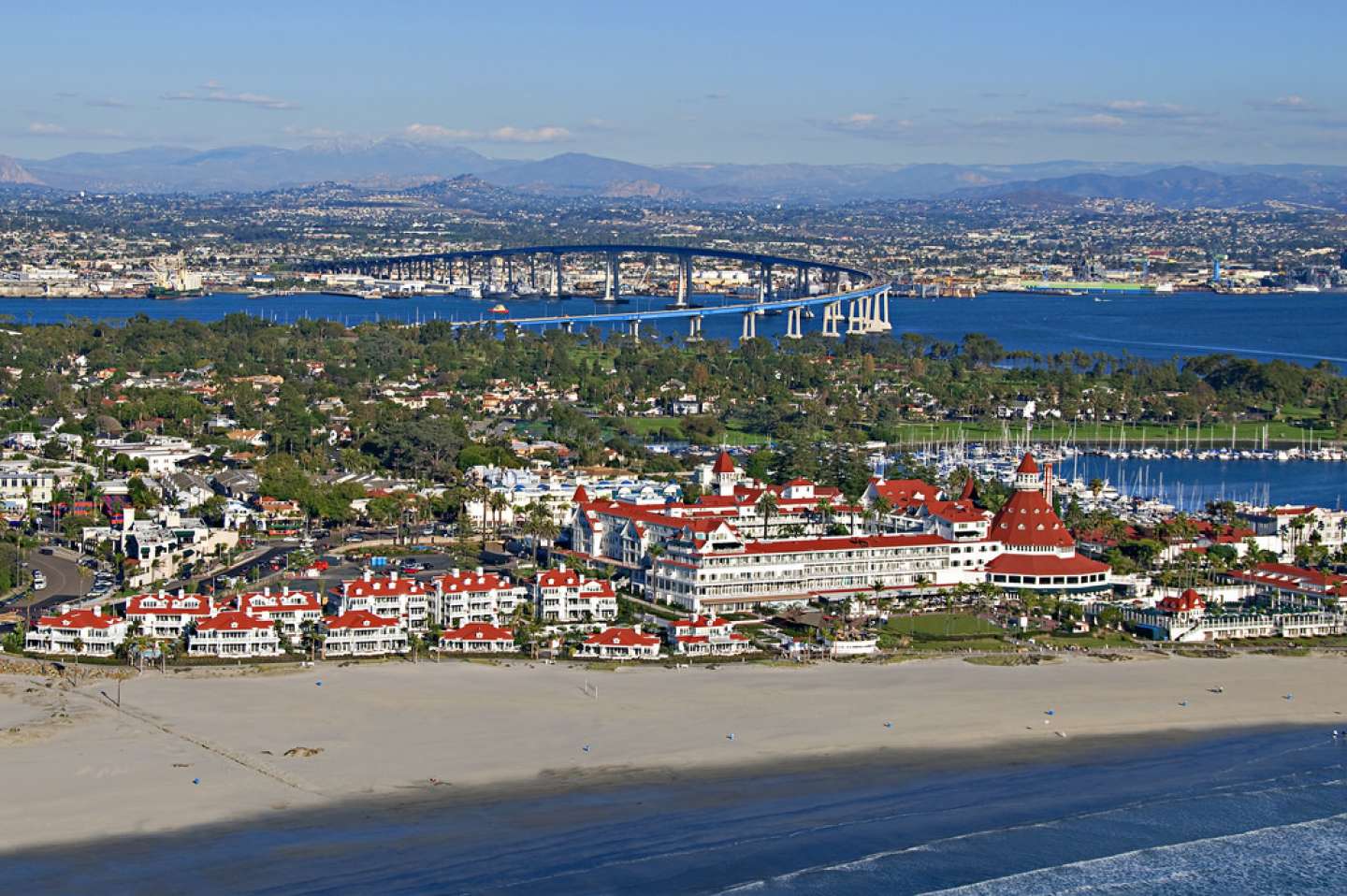 The crown jewel of Coronado is, of course, the Hotel Del Coronado http://hoteldel.com/. Before it was completed in 1877 there was little more than dust and scattered tufts of pampas grass. But the dreams and vision that brought forth the grand hotel spread outward, and shortly the whole island was transformed into the lush, green, and (relatively) tranquil community you see today.

A stroll through the exquisite Coronado neighborhoods is a hint of the island's military presence on its north side. Many current and former navy personnel have homes here, and that military precision shows in the beautifully kept homes and immaculate landscaping (you could bounce a quarter off the lawns). But perhaps a better way to stroll the area around the Hotel Del is to tag along with Coronado Touring http://coronadowalkingtour.com/pop.php for a truly fun and fascinating walking tour. The grand and historic feel of the Hotel Del suggests a great story all its own, and a couple of hours with Coronado Touring confirms it. You'll even see "The Oz House", Mr. Baum's former "off-site" residence. If you can do this early in your Coronado visit, you'll then see the place with a sense of wonder you might otherwise miss (how else would you know about the secret message in the sand dunes?).

The walking tour begins in the Glorietta Bay Inn http://www.gloriettabayinn.com/, which is itself significant in the story, as it's principle building was the home of Coronado's greatest benefactor and "savior" of the Hotel Del dream, John Spreckels. The Glorietta is a terrific option to the Del Coronado, as you are just across the street from the Del but can choose from luxurious and historic rooms in Spreckels's original house or more modern and affordable rooms of various sizes throughout the rest of the hotel. The entire property is immaculately kept and the friendly staff clearly take their cue from, Claudia, the Glorietta's gregarious and hospitable manager.

The vivid and fascinating history of the island lends a richer tone to everything else you experience afterward. Just a few blocks from the Hotel Del, Clayton's Coffee Shop could be just a nifty 50's-themed diner (albeit with great food and sumptuous milkshakes), but now it feels like a time machine and you wouldn't be surprised to see Mr. Baum himself at the counter reading the day's paper over a coffee and apple pie. Two more blocks along Orange Avenue will find you transported back to that golden age of theatre at the incredibly restored Village Theatre http://www.vintagecinemas.com/village/, and two blocks back on Orange Avenue from Clayton's will satisfy that old fashioned summer yen for handcrafted ice cream at the Moo Time Creamery http://www.nadolife.com/mootime/loc-coronado.html. And of course many of the shops at the Hotel del Coronado itself http://www.hoteldel.com/Shops-at-the-Del.aspx recapture that historic feel, like at Spreckels Sweets & Treats, where you can get (among loads of other things) the same fudge or saltwater taffy that Frank Baum undoubtedly sampled.

But while Coronado Island certainly honors its rich history, it has grown up nicely with terrific contemporary offerings. Head south along the narrow peninsula (Coronado is technically not an island) where you'll find the contemporary and luxurious Loews Coronado Bay Resort http://www.loewshotels.com/Coronado-Bay-Resort, one of Parents Magazine's "10 Best Family Beach Resorts". The sheer luster in the recently refurbished interior betrays the many family-oriented amenities, including poolside movies (at just one of the three pools!), a dedicated kids' activity desk, and rides in one of their authentic Venetian gondolas. And it's just a short walk or free shuttle to the quiet Silver Strand State Beach, which might seem like your own private beach, relative to crowds at Coronado Beach.

Further along Orange Avenue from the Hotel Del on the north side of the Island you'll find a host of shops, restaurants, and activities surrounding the Ferry Landing http://coronadoferrylandingshops.com/. Nearby the Ferry Landing is the sumptuous Coronado Island Marriott Resort http://www.marriott.com/hotels/travel/sanci-coronado-island-marriott-resort-and-spa/, with exquisite views over the bay to the beautiful San Diego skyline, rejuvenating spa treatments, a private water taxi across the bay for guests, and a lush pool and outdoor restaurant that you may find difficult to leave to explore Coronado.

- Learning: Get the full and fascinating story on the island at the Coronado Museum of History & Art http://coronadohistory.org/.