Are you considering a family trip to Europe sometime soon?

Here: data collected by KAYAK that may inspire your family travel plans.

-          Now may be the time to experience the Nordic Countries’ famous midnight sun phenomenon. In addition to Reykjavik, Oslo, Helsinki, Stockholm and Copenhagen all appear on the list.

-          East Coasters can score the best deals. 6 of the 10 cheapest flights were in Eastern states including New York, Florida, Massachusetts and Rhode Island.

Find your city below:

The family travel season is about to be in full swing.

Dad and travel expert Jim Mazza, Chief Operating Officer for TRAVELSAVERS, a retail chain of more than 2,500 independently owned, full-service travel agencies, offered a few words of wisdom for those who plan to board a flight in the weeks and months ahead.

As a dad, Mazza knows small kids are at their best earlier in the day before exhaustion sets in for them (and their parents).  More than that, and important for travelers of every age, delays often build as the day goes on, particularly in the Northeast.

Understand the fare you are booking.

For many travelers, especially cost-conscious families, price matters.  It may seem like the right thing to book the least expensive fare that pops up, but these are often “branded fares” which come with tough restrictions including seat choice, leg room and baggage allowance. 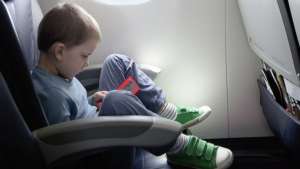 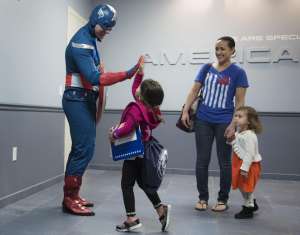 Each time I embark on an air travel trip I am reminded of what an adventure it can be!

And I’m a grown-up! I marvel at the challenges faced by parents of young children today. Getting through the security check point with diaper bags, strollers, toys, snacks, gear can be daunting.

If boarding a flight with the kids is part of your travel plan, here are a few tips to help you avoid snags in the system:

Print boarding passes in advance. Confirm flight departure times. Remind older children to bring their IDs and have yours ready. Arrive at the airport with time to spare.

Will you be spending time on the beach in Mexico or skiing Whistler in Canada? Don’t forget. Passports are required.

It is important stay hydrated when traveling. But water bottles are not permitted through the security line. Rather than buy high-priced water bottles in the airline gate area, bring an empty bottle through security and fill up at the drinking fountain. It’s more eco-friendly too.

Airlines rarely serve complimentary food on board. So avoid expensive airport and onboard dining options by packing healthy and familiar food for the flight. By keeping everyone fed in a timely manner, you’ll avoid cranky kids and parents.

Talk with your children about how you will spend your time on board. Then be sure to pack the books, art projects, ipods, games, headsets and other gear necessary for the flight.

The rules continue to evolve and seem to vary slightly by destination. So before you head to the airport check the TSA website for the latest updates. Resources: www.TSA.gov; www.travel.state.gov.

Backpacks or roller bags for all.

Children like taking responsibility for their own gear. Ask everyone to carry as much as possible in their own backpack or carry –on. It’s good practice and lightens the load for the adults.

Family members can get separated during the crazy process of going through crowded security lines. Let TSA representatives know you are traveling as a family if they try to steer you to apart. If you do lose sight of one another, plan to meet at a designated spot on the other side.

Make sure the kids (and the grown-ups) are aware that while moving through the security line, it is not the time for jokes or silliness. An ill-timed, kooky comment ( no matter how innocent the intent ) can cause unexpected and unpleasant consequences.

Different country, different rules. Shoes on? Shoes off? Computers out or in? Review country and airport guidelines before departure. Don’t be afraid to ask for help when moving through security in another country.

Have a great time!