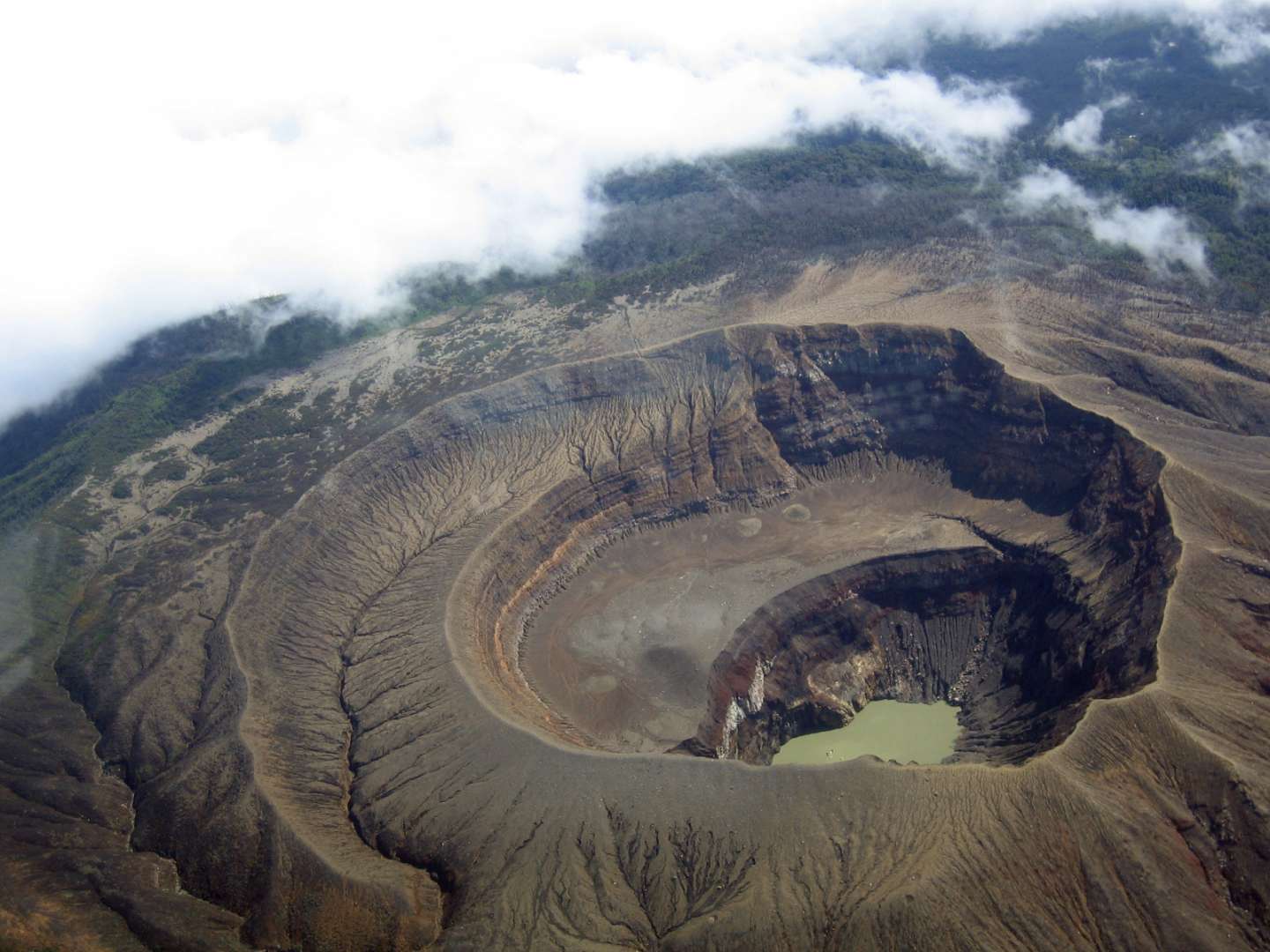 Since the early 1900s, the Izalco Volcano northwest of San Salvador remained active, emitting steam and heat into the atmosphere. It was such a popular site from neighboring Cerro Verde Mountain that the government decided to build a resort at the top of Cerro Verde, but there was a problem. Three witches who lived at the base of the mountain asked the resort not be built because it was a sacred mountain.

Well who cares about a bunch of witches, certainly not the Salvadoran government, and it told the witches it would proceed with the development. The witches put a curse on the project and sure enough after it was completed Izalco Volcano went quiet.

Eventually the resort went quiet as well. Today, when people go to the summit of Cerro Verde, whether for a picnic or simply to enjoy the salubrious mountain air, they usually end up climbing around the boarded-up resort as if it was a Mayan ruin.

I’m not sure what happened to the resort, but to my mind it still seemed like the perfect place to have a lodge of some sort. The air is cooler than in San Salvador, the views of Izalco are still there, and the ride to the summit is absolutely a treat.

Just before the mountains is a massive crater formed by volcanic eruption years before. Over the centuries water accumulated, forming, in this almost perfectly circular geographic structure, Lake Coatepeque. From high above, as you look down into the lake, you notice a small island had formed and that the edges of the lake were dotted with private, vacation homes including one belonging to the president of the country.

From the waters of the Coatepeque, the cone rises up sharply. It’s all very wooded now, from the water’s edge to the peak circumference of the cone and as I looked about, the top of the cone seemed to be a thin line of rock, but I was wrong because the road to Cerro Verde was along one of the conical sides of the old volcano. It was a two-lane thoroughfare that followed the circumference geography and in its simplicity a nice piece of engineering, although I was fairly sure the ancient civilizations, the Mayans or the Olmecs, probably had created the first path along the very same route.

Later, on the road back from Cerro Verde, my guide and I would stop for a lunch at a restaurant with an overlook of the lake – one of the great sites in a land of many great vistas not much visited by non-Salvadorans.

A Land of Volcanoes

I’m told by my guide that El Salvador counts 25 volcanoes, which is an extraordinary for such a small country. The land there is restless. Every once in a while it all comes to life either through an eruption, earthquake, landslide or any combination thereof. We are not talking dinosaur life but in modern times. The last volcanic eruption in El Salvador was in 2005.

If one looks at the topography of the capital city, the population sits in a broad valley between a couple of high peaks, one of which is a volcano, and the other, La Puerta Del Diablo (The Devil’s Door) is a popular park area that really completed its geographic formation early in the 1700s when landslides reformed the mountainside. Today, La Puerta Del Diablo is framed by two immense rock formations, the highest of which is 3,250 feet and is a major climbing location. For the rest of us, there is a short trail to a cavern. Make the walk because the view from there is stunning. On a clear day, you may not be able to see forever, but you can see to the Pacific Ocean.

The most visible volcano from the city is the defining peak of San Salvador, the Boqueron Volcano at Cerro El Picacho at almost 6,328 feet. At the summit is the popular El Boqueron National Park, with the most visible attraction being the immense crater. A tourist trail with look-out points wraps around the conical summit. The crater can’t be entered without a guide, but even without that excitement the view from the top is worth it as oddly, within the larger crater is a smaller, distinctive crater at the bottom of the formation.

El Salvador’s volcanic peaks seem to come in bunches. Probably the most accessible, historically significant and picturesque are in the mountain ranges to west. I skirted the mountains, heading along what is sometimes called the Mayan Route, since this was an area settled by the Mayans after the volcanic eruption in a nearby lake region. My first stop was the ruins of Joya de Ceren, a relatively recent discovery. Unlike the big Mayan ruins stretching throughout Central America from Honduras to southern Mexico, Joya de Ceren, was not a ceremonial place but a living area that was covered by volcanic ash. As a result, this site is one the few places where archaeologists go to learn what common-folk, Mayan life was life.

The Ruins of El Tazumal

Further to the northwest can be found the much grander ruins of El Tazumal, which looks much like the great Mayan ruins of ceremonial places found elsewhere in Central America. Tazumsl is not as tall, as say, Tikal in Guatemala, looking more like a squat palace, but its impressive nevertheless. There is a small but wonderful museum on the site, where resides the largest Mayan ceramic statue ever found.

After La Tazumal, I headed southwest in the heart of Mayan mountain country, but now dotted by many small villages, basically unchanged from their Spanish heritage. I stayed two nights in the cheery Ahuachapan, temporarily residing in the town’s fanciest accommodation, but in American lexicon, just a bed & breakfast, which was built out of a traditional, one-story colonial habitat. The proprietress, a former beauty queen, decorated the place with bits of antiques, arts and crafts and family heirlooms.

From my base in Ahuachapan, I spent a day visiting the villages of Apaneca, Juayua, Salcoatitan and Nahuizalco. All the villages are connected by a two-lane mountain road that looked precarious at best, but never slowed down the local drivers or pedestrians. On the road out of Nuizalco you should actually slow down and find the overlook along the side of the road. From this single spot you can see seven volcanoes. Five in a long line and two more in the distance.

This is coffee country and just for something different to do, I stopped by the coffee plantation called the Carmen Estate for a lesson as to how coffee is grown and prepared – and I have to say, to get from seed to the coffee bean we know, is a lot more complicated than I imagined. I got to help “sweep” the seedlings into drying position using not a traditional broom, but one with a flat wooden face instead of a brush. My reward, a fresh-brewed coffee from locally grown beans. It was like drinking a fine cognac.

The steep mountains look lush and green, but if you look closely this is mostly coffee being grown on the mountainsides and divided into plots by other types of vegetation. Coffee has been a blessing and a curse to El Salvador. Beginning in the late 1800s, it became the country’s first major cash crop, but when the market collapsed after World War I and with the coming of the global depression, thousands of native peoples were thrown out of work. They rebelled only to be slaughtered by the tens of thousands.

There is a small cultural center in Juayua that is in effect a museum of the genocide.

The conflicts of the 1930s in a sense festered and grew until the 1980s when the country entered into 12-year civil war.

In Apaneca, my guide took me to visit the home a friend who had been part of the guerilla support network during the civil war. Surprisingly, the home was chock-a-block with crafts, collectibles and bits of antiquity. With thousands of years of Mayan civilization and then Spanish domination beginning the 1500s, there seems to be so much antiquity about that I had not gone into an El Salvadoran home that didn’t have something that looked like it belonged in a museum.

Although the old revolutionary was quite proud of his collection, I took a picture of him not alongside his treasures but standing near a large, iconic photograph – of Che Guevara.

Coming from Phoenix, I flew first to Los Angeles International where I got a direct flight to San Salvador via Taca Airlines. www.taca.com

My first two nights in San Salvador, I stayed at the Holiday Inn, near to the American Embassy (www.holidayinn.com). In San Salvador, I also stayed one night at the Hotel Mirador Plaza, a beautiful, boutique hotel favored by businessmen and occasional celebrities (www.miradorplaza.com). In the village of Ahuachapan, my accommodation was the Hotel Casa de Mamapan, a pleasant Salvadoran version of a historic inn ( http://lacasademamapan.com). Finally, a real surprise was the ultra-modern La Cocotera Resort on the shores of the Pacific Ocean (http://www.lacocoteraresort.com).

I was traveling alone and Salvadorean Tours (www.salvadoreantours.com ) arranged not only my itinerary but furnished me with a car and driver the whole time I was in El Salvador. Excellent service all around.