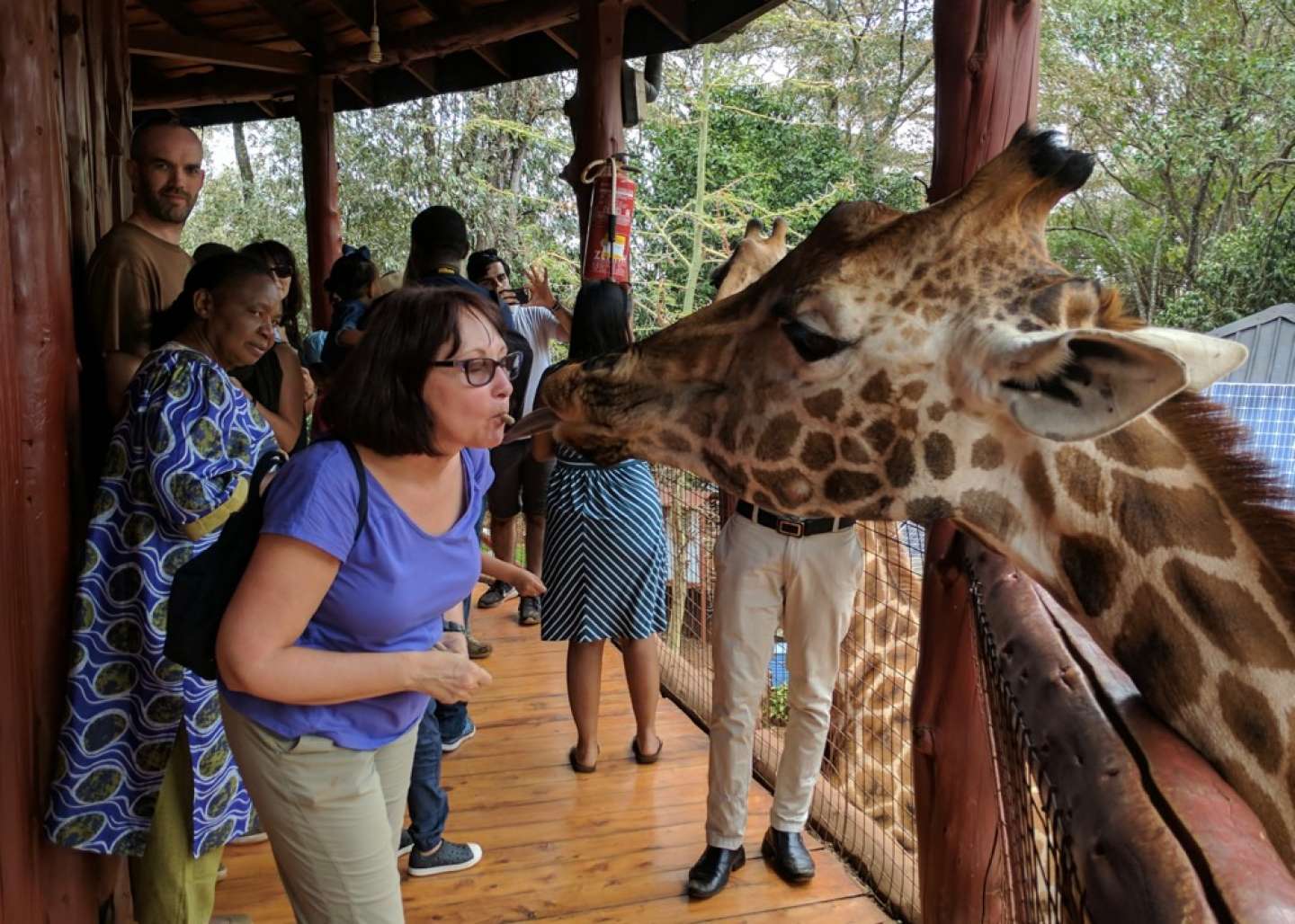 Want to kiss a giraffe?

You’ve probably never asked yourself that question. But yes, you can, as my kids discovered on a recent visit to Kenya.

Head over to the Giraffe Centre just outside Nairobi, more formally known as the African Fund for Endangered Wildlife, a breeding center of the endangered Rothschild’s giraffe.

Our whirlwind tour of two Kenyan wildlife attractions took place in a single morning, the ideal day trip if you happen to be in Nairobi for a day or two. If nothing else, it’ll allow your family to appreciate the conservancy efforts being made in Africa, or just to get in touch with your wilder side.

Here’s how the Giraffe thing works: You pay the $9.65 admission to the center, and that gets you close — very close — to these rare giraffe. A guide will offer you a pellet. It’s not for you, it’s for the giraffe. Open your hand and one of these gentle creatures will swoop down and gobble up the pellet.

My daughter, who can follow basic instructions when she wants to, decided to cooperate. She’s only 10 and fairly short. The Rothschilds must have looked like monsters to her. Good call.

After a few false starts (she dropped the pellet and the annoyed giraffe retreated into the sky) she made contact with tallest terrestrial animal on earth. Specifically, with the animal’s long, gray tongue.

What does giraffe saliva feels like? Glad you asked. In order to find out, I grabbed a pellet and offered it to the nearest animal. It gratefully accepted, leaving a generous amount of warm, thick, translucent substance behind. It felt a little sticky.

What does it taste like? Ask this woman, who was part of a delegation of American travel agents in town for a convention. Brave soul.

She did not reveal any details of this intimate moment to the group. Then again, we were so shocked by it, no one could say a word.

But it’s settled: You can kiss a giraffe.

Elephants, mud and a cautionary tale of getting too close

At the David Sheldrick Wildlife Trust, Kenya’s famous elephant orphanage,  you can get close to one of nature’s cutest creations: baby elephants. The trust helps rescue and raise mostly elephant and rhino orphans. Guides parade the babies into a large viewing area, where the orphans receive milk, water and leafy vegetation.

But the question isn’t if can you get close, but do you want to. With signs like this, the kids had second thoughts, understandably.

Just to be clear, the elephants didn’t look dangerous at all. On the contrary, they were adorable. Maybe a little messy, rolling around in all that red mud, but still adorable.

Can we stay on the topic of messy for a moment.

Elephants can squirt water over long distances. You probably know where this is going, right? Now scroll to the top of this story and look at my daughter’s shirt. Notice anything? Yep, nailed by a baby elephant. I got splattered, too. Those pachyderms can spit!

But, awwww. How could you stay mad at something like this?

Like the Giraffe Centre, the Sheldrick Trust is doing this for a good cause — in this case, offering hope for the future of Kenya’s threatened elephant and rhino populations against poachers, loss of habitat and human conflict. That’s well worth the $7 contribution to get into the orphanage.

If you don’t have the time or resources for an African safari, this day trip may be the next best thing. Your kids are guaranteed to see giraffe, elephant, rhino and other species in an almost-natural environment.