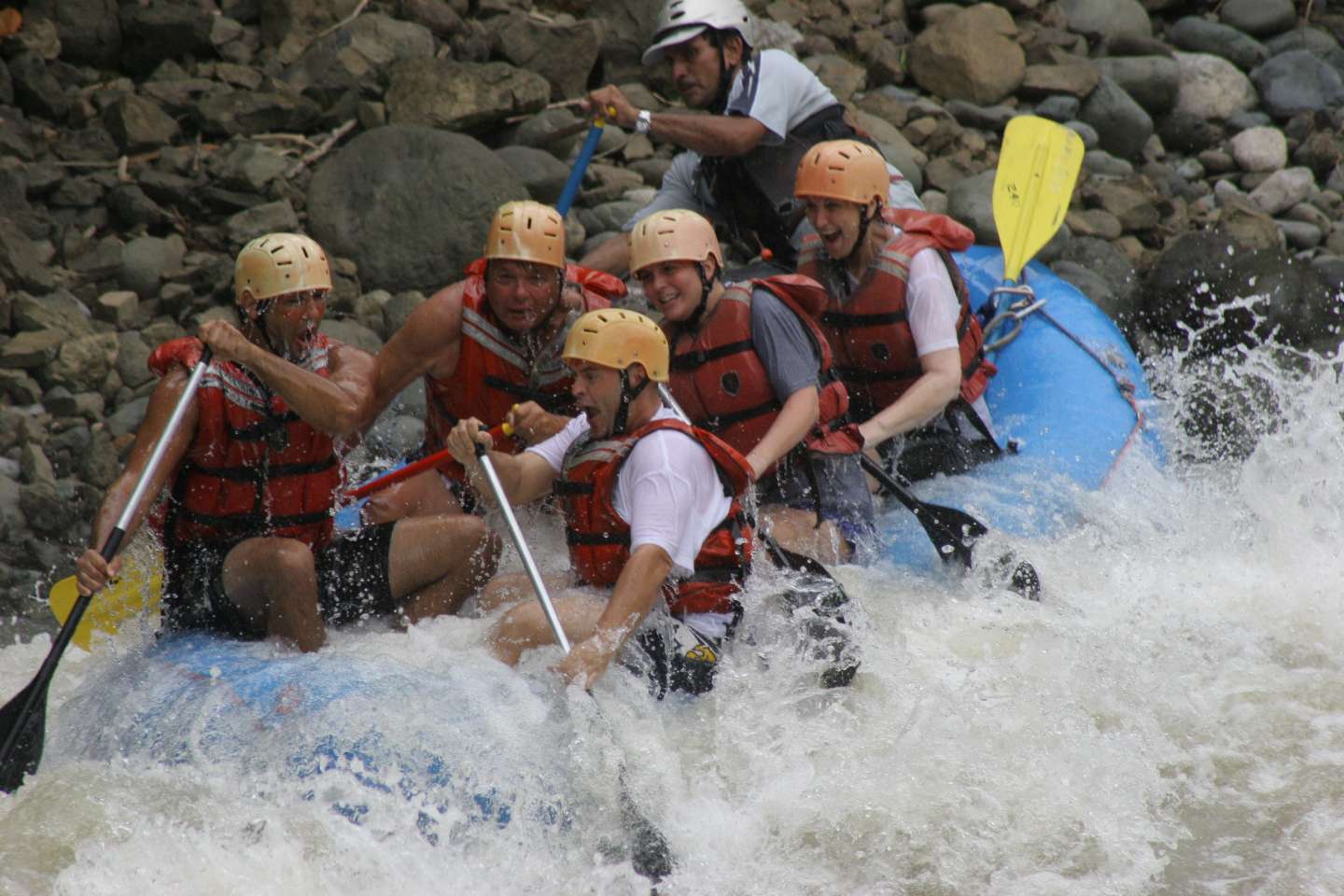 School's Out For Summer

Ahhhh.... The vibrant sound of the school bell on a mid-afternoon June day is exhilarating.  It signals to rambunctious youth that 20 year-old textbooks, chewing gum-covered desks and tedious homework can all be left behind for a new summer of adventures.  Most kids reflect upon the sultry beaches and crowded amusement parks that they will visit.  But it is different in my family.
My dreams are not of the wonders of silky sand caressing my toes.  Instead I dream of adventure--- rich experiences I can take home with me.  I dream of foreign culture--- exotic encounters in unique communities.  In my family, that unreachable daydream can become a reality overnight. And it did.
It was like I was in a trance, because the next thing I knew, a jungle of mysterious creatures surrounded me. I felt the eyes of the wild animals tracking my every move.  It seemed in this Costa Rican paradise, a blink of an eye can change everything.
Into The Jungle
At one moment I was suspended hundreds of feet in the air, whooshing through a blur of foliage as I glided 2,000 feet over the gorgeous green canopy on my zipline cable.  Volcanoes on all sides hemmed me in, as I took in this rare aerial panoramic view.  Sooner than I thought possible, I found myself riding a roller coaster of whitewater bouncing from boulder to boulder in my humble little vessel -- a rubber inner tube.  It was like hitching a ride inside an aquatic pinball machine.  The next thing I knew, I was strolling the simple, funky city streets of coastal Tortuguera, walking by fluorescent-colored buildings and photographing its lively culture.
Meeting The Monkey
I was even lucky enough to encounter two beautiful treetop-clinging mammals.  Before long I caught an almost perfect glimpse of an elusive, wild monkey.

At first it seemed the beast was deliberately antagonizing me, with its mocking howls echoing for miles.  Suddenly, I spotted his full head, which appeared with a surprised expression.  I was thrilled to meet my ancient cousin.  And, just when I thought I had reached the height of wildlife-spotting fortune, the clownish grin of a three-toed sloth came into view; the "lazy animal"  (his nickname amongst the indigenous people) only leaves the top of his canopy perch for a weekly defecation ceremony.

While it may not have been a thoroughly relaxing trip, it was just the perfect tempo for an energetic family like ours.
In fact, I was in Central America to teach photography along with my father for Tauck Bridges- a fun-filled, family-focused program run by a high-end, luxury tour company (You can watch my photo/video presentation about the trip here- http://bit.ly/ontJsd). With my mom an accomplished writer, and my dad an award-winning travel journalist, I have been part of a creative and artistic family since birth. Becoming a photographer was a natural path and seemed an obvious progression that was bound to happen. I got into the art young, having always been transfixed by my father's work.

The end of our one-week Tauck adventure wasn't really the end of our Central American exploration, it was more like an introduction. Continuing our journey through Costa Rica, we made a luxurious two-day "pit stop" at the Tabacon Resort and Spa. Situated near Arenal Volcano, this dreamlike lodge hosts an array of luxuriant lava-fed hot spring pools and waterfalls deep within the rain forest.

After several soaks, I had the realization that we were only five hours away from another intriguing nation--- a melting pot of indigenous Latin culture--- Nicaragua. I looked north towards the horizon, longing to experience a new nation.

But the next morning, like out of a Biblical passage, it became so. My parents arranged a vehicle that whooshed us north beyond the borders of customs and immigration, and toward fabled Lake Nicaragua. We passed the jade-colored waters of the only freshwater lake in the world that sharks inhabit, before arriving at the colorful lakeside town of Granada.
"The rocking chair capital of the world," my dad proclaimed, as he observed the presence of that swaying furniture on every residential stoop.  I watched as elderly ladies consumed their dinners while rocking away in the doorways of their simple homes. A palpable energy pervaded the nearby market, chock-a-block with live fowl, spicy fragrance, narrow alleyways and frantic hubbub. Straddling the equator, tropical daylight here seems far too short, and this day was becoming shorter and darker as a violent storm ripped across the sky. We had to make the voyage toward the center of Lake Nicaragua in a small boat. As we made our journey across a windswept bay, a waterfall of rain doused our heads and poured on top of the vessel. We finally chugged our way to a Shangri-La--- the only lit island on the horizon of this monstrous lake.

Jicaro Ecolodge is a magical and hidden paradise in the middle of a spectacular volcano-dotted lake. Jicaro was the perfect, relaxing escape from the crowds of the city and the now cascading deluge. That night, the sounds of chirping insects and gulping frogs enveloped us as we indulged in a mouth-watering feast of local cuisine in Jicaro’s open-air dining room. The next morning I acknowledged the sad truth: we had only one day left. But in the Guttman family, no hour goes to waste. So we tried to cram yet more adventures into the trip.

On our last day, we kayaked to a secluded area of the lake, where through a small opening in the marsh grass, we were permitted access to a secret hot spring. In that small cove, we swam and relaxed before hiking the winding trails in search of wildlife. To finish off the afternoon, we got up close and personal with the active, belching, powerful Masaya Volcano.  As night approached, we descended beneath the edges of Masaya’s crater and trekked through a forbidding bat cave.  Our footsteps moved closer to the edge of the pitch-dark cavern and like a scene cut from a horror movie, thousands of bats screamed out of the cave and flew right at me. Crashing into my hardhat, the vampire bats flooded the air and caused the others around me to scream. To make matters scarier, another torrential downpour suddenly began. We managed to dodge a porcupine and get away from the cave, but we still had to somehow get down from atop the crater in the dark.

As we reached our car, the visibility dwindled down to zero. The rain had mixed with steaming lava to create a thick sulphuric whiteout fog.  It was so bad that our guide had to direct the car down the road on foot in the middle of the raging lightning storm.  Save the bolts lighting the slopes, I could see nothing.  All I heard was our guide and driver screaming frantically in Spanish as we slowly crept our way down the mountain. Suddenly, we hit a big bump and I heard a loud thump. Everyone had a shocked expression across their faces. My heart rocketed out of my body as I thought we had fallen off the cliff edge into a chasm of lava. My dad opened the door to double check. It seemed we were still firmly on the road and okay. After playing hide and seek with Mother Nature we finally made it to the bottom. Safe.

Back at home, I had a chance to reflect. School may be just around the corner again, but as Mark Twain once said, “I have never let my schooling interfere with my education.”

Chase Guttman is a passionate and talented photographer, political junkie, intrepid explorer, and world traveler. Chase visited more than 35 countries, 45 U.S. states, and 8 Canadian provinces by the time he was 12. All photographs that accompany this story are his. Find out more at www.ChaseGuttman.com.

View the embedded image gallery online at:
https://www.familytravel.com/go-global/costa-rica-a-kids-perspective.html#sigProId02db8eab01
back to top