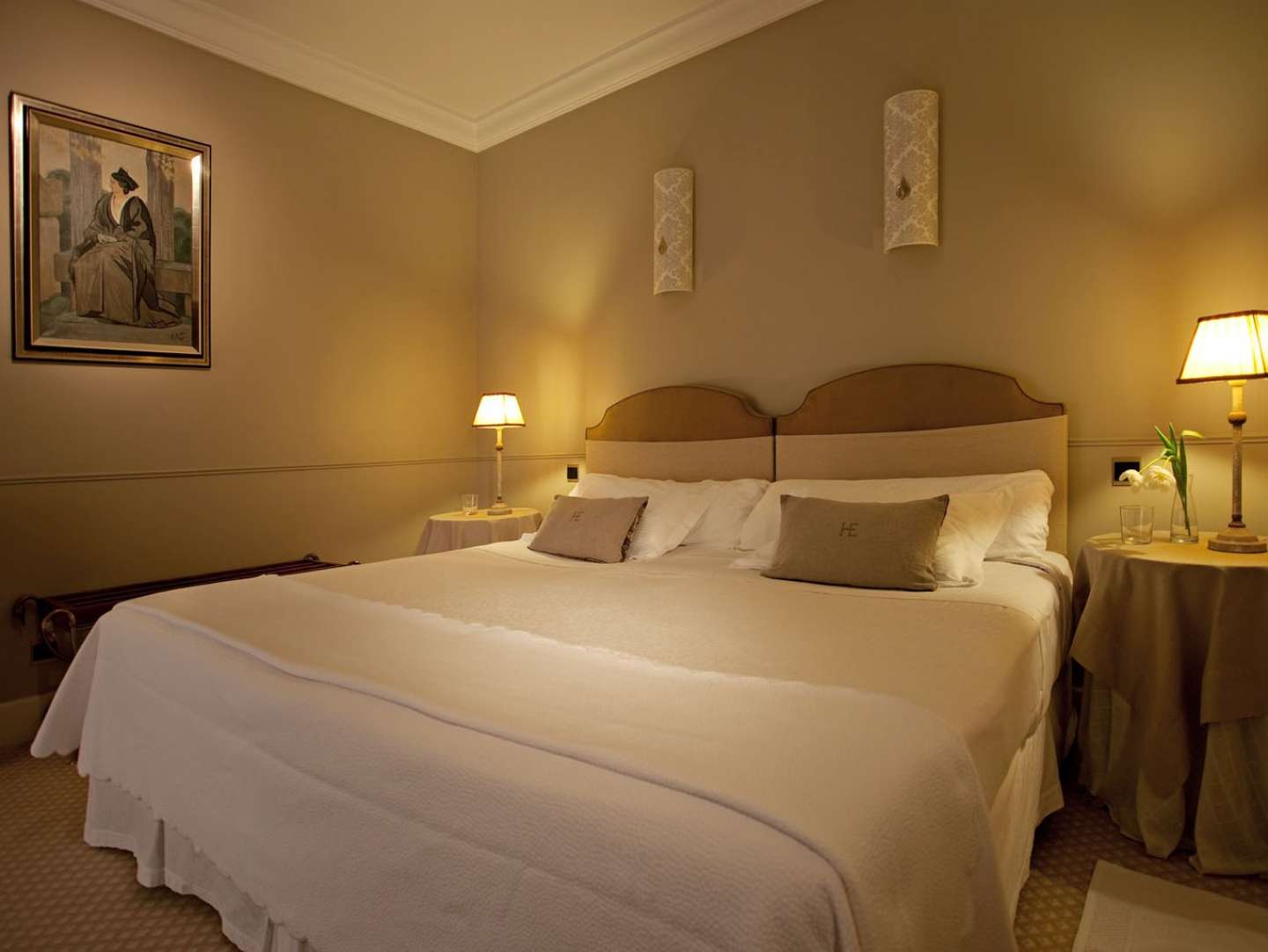 A Few Things to Know about Hotel Rooms in Europe

I learned about the basic American hotel room from Howard Johnson in the 1960’s. Two double beds with back boards bolted to the wall, two fake oil paintings above said backboards, a stand in between the beds with a lamp and phone, a standard bathroom, and a TV.   The last time I checked, little has changed. When you book a room in the USA you know exactly what you are getting.

This is not the case overseas. Europe has a 1-5 star rating system that is extremely consistent. But the stars have more to do with the amenities offered than the overall glamour quotient. My family quickly found that three star hotels were the right match for us. They were affordable, often family owned, clean, and came with breakfast in the morning. But the similarities stopped there. When it came to design, well, let’s just say that half the adventure of our day was exploring our night’s lodgings.

First, when you make reservations you must specify how many people will be in the room because you are charged per person rather than per room. Since we always wanted to be together, we would ask for a room for four people thinking that would be easy: two queen beds, Ho Jo style. But that was simply not the norm. Because there is no norm. Sometimes we’d get a double and two singles, or three singles and a sleeping bag, sometimes bunk beds, and sometimes four singles jammed into a space that looks like it could hold only a double. And the beds were not always lined up in neat symmetrical fashion. They were jammed in whatever way worked like pick-up-sticks that fall every which way.

Some of the rooms were cozy with wood furniture and pretty wallpaper. And some were as austere as prison cells with a tiny window that opened onto a dark alley. And the bathrooms, well, talk about an adventure all its own.

These are some of the unique styles that we have had the pleasure of sampling:

2. The tiny bathroom that doubles as a shower. There is no shower curtain to cordon off the shower area. Simply a shower head in the ceiling and a drain in the floor. The entire contents of the bathroom gets soaking wet including all of your make-up and toiletries. After toweling off you feel this pressure to towel off the entire bathroom. Very time consuming.

3. The tiny bathroom that has a little shower curtain but no basin on the floor so the whole bathroom fills up with water since the drain usually is very slow and you have to slosh around in an inch or two of sudsy water while you attempt to towel off and get dressed. At least your toiletries and make-up are safe. But be careful not to drop the hairdryer.

4. The tiny bathroom with a shower curtain and a basin to catch the water. This is an appreciated upgrade. Even more so when the water temperature doesn’t alternate between ice and lava while you are showering.

5. The mid-sized bathroom with no shower. Only a tub with a hand held spigot for rinsing. Bath tubs are not necessarily designed for pampering, unless of course your idea of relaxing involves bending all of your joints at 90 degree angles at the same time. Again, this bathing experience usually ends up with water all over the bathroom floor as the absence of a shower curtain insures that the water from your hand held sprayer will bounce off your head and shoulders and land anywhere outside the tub. Besides, it is inevitable that at least once during the bath you will forget about the sprayer and will turn it in some unexpected position and it will spray all over the room. Usually hitting your make-up and toiletries.

6. The fancy bathroom. Once in awhile we would luck out and get a spacious bathroom with a big tub and separate shower. We would feel like royalty and take turns soaking in the tub after dinner thinking about the good old days when this was just a normal occurrence.

7. My personal favorite was the bathroom in the hotel outside Siena. This bathroom, presumably to save space, had a molded shower/bidet contraption that was cylindrical in shape. (God help the people that were over 140 lbs because there was no way the door would close) Besides the fact that you had to shower in the previous tenant’s bidet residue, you were sure that any moment you would be beamed up to the Enterprise in your birthday suit to meet Captain Kirk and the crew.

You will invariably find a cord hanging in every shower or bath. It is affixed to this little box that is stuck to the wall high above your head. Presumably it is to call for help if there is an emergency. What, exactly, are all of these bathroom emergencies that are going on all over Europe? Why have we not heard of these on CNN or FOX News? If you do pull on it (and you have no idea how tempting that is) does someone magically appear to help you? Does that someone look like Andy Garcia in a towel?

There is something to be said about all of this diversity. It has been amusing, creative, and entertaining. It has been the fodder for countless breakfast conversations and night time giggles. It somehow feels more human, and the fact that they are family owned makes them cozier. Maybe it’s the pride that goes into it, or the ‘make-do’ spirit. Or the individualism and personal touch of the owners who welcome you upon arrival and whip up breakfast for you at dawn.

It certainly made us wonder how a country such as ours, based on the strength and freedom of the individual, could evolve into a nation where everything looks the same.

Where’s the individualism in that?