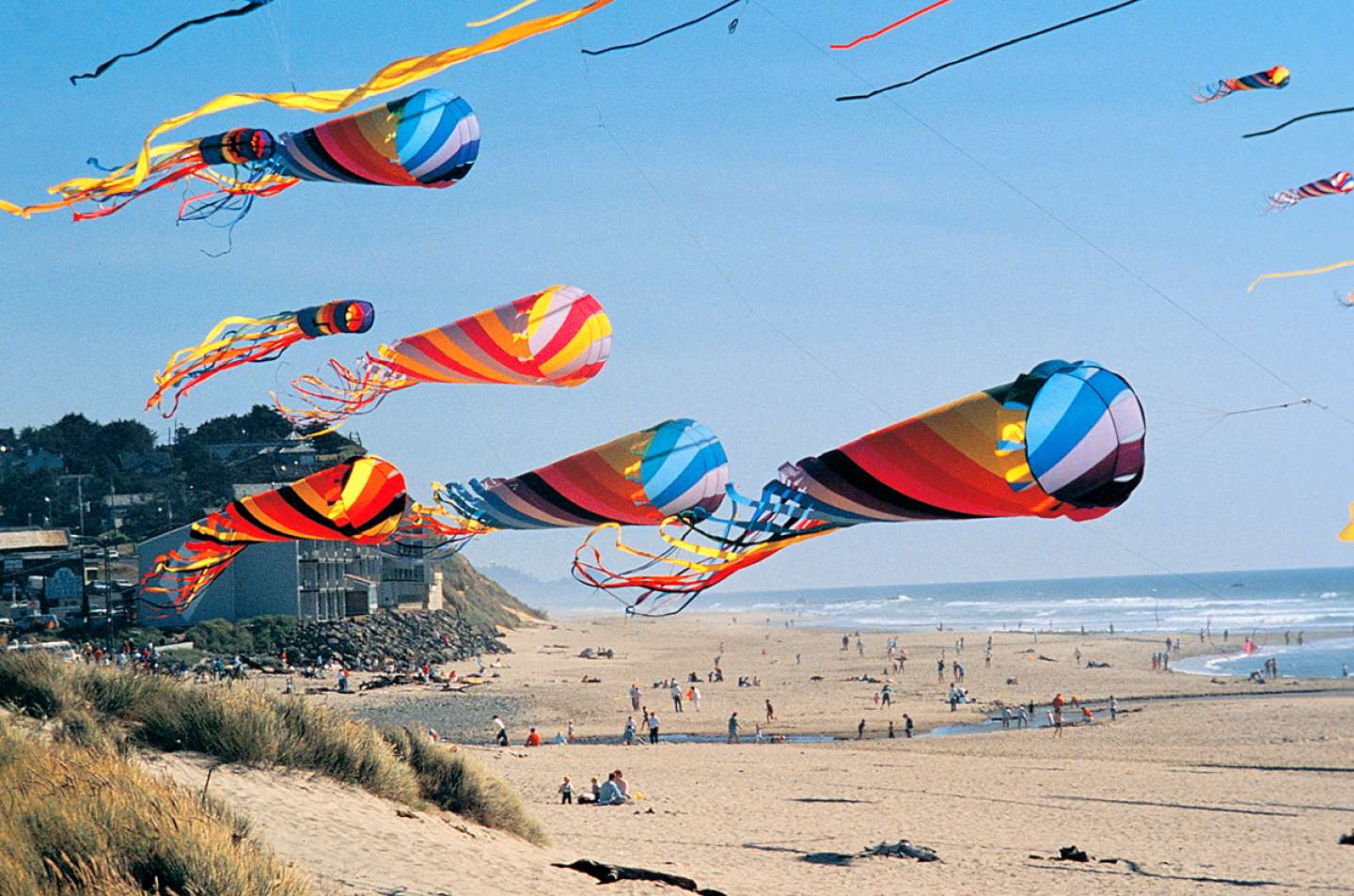 Discovering Oregon's Coast With the Kids

Oregon’s cool and mysterious coast isn’t a what-you-see-is-what-you-get kind of place. Only repeated visits allow you to discover why it’s one of America’s most underrated destinations.

And on our last trip through the Beaver State, something clicked.

Our family road trip took us through Lincoln City in central Oregon, and wound its way along two-lane roads to Pacific City, Cape Meares, and finally Portland. Along the way, we learned to golf, kayaked to the edge of the ocean, climbed an enormous sand dune, hiked along countless beaches, and then wrapped up our adventure with a riverfront stay in the Rose City.

If you begin your journey in Lincoln City, as we did, you’ll notice the Pacific coast starts to present itself in an unexpected way. Farther south, California’s coastline offers either cliffs or beaches, but somehow, Oregon manages to do both at the same time. Beach here, rock there. And over there, an estuary teeming with wildlife.

A terrific starting point is a quiet round of golf at Salishan Spa & Golf Resort. The course, bracketed by old-growth firs, presents a spectacular view of a chilly Pacific, and the morning fog burns off into postcard-perfect days during midsummer. If you’re there with young kids, as I was, you’ll probably want to take them down to the pro shop for a lesson and then to the beach to run around.

Just a few miles north, in the Salmon River, the kids and I did a deep dive into coastal Oregon by taking a guided tour with Kayak Tillamook. Our guide led us out just as the tide was slackening, which made paddling to the mouth of the Pacific a little easier. The estuary system became a United Nations Biosphere Reserve after several dikes were demolished a generation ago to restore the tidal waters.

But Salmon River saves the best for the last — a view of the Cascade Head and Three Rocks in a churning Pacific. From the water, it is truly a sight, and it rendered my normally chatty kids silent, in awe.

By contrast, my kids, ages 10, 12 and 15, were energized by what they saw in Pacific City: the enormous sand dunes and rock formations of Cape Kiwanda State Natural Area. You can climb to the top of these sandy peaks and discover even more about what makes the Oregon coast so special, like the vertical columns of Chief Kiawanda Rock surrounded by crashing waves. It’s a heart-pounding climb to the top, but once you’re there, you feel like you’re on another planet. This is unlike anything you’ve ever seen, or are likely to see again.

From there, we took the slow road north. The Three Capes Scenic Route is a 40-mile road trip that demands your attention. Some of the scenery is so remarkable that words fail me. Take pictures; your friends will think you Photoshopped them. My colleague Grant McOmie did an outstanding job describing what you’ll see in this video. Give yourself a full day to take this drive. Bring a picnic lunch and your swimsuit — and don’t forget to charge your phone so you can take lots of pictures.

We settled in a vacation rental near Cape Meares, on the northern tip of the drive, for a few days. Because of a road closure, Cape Meares is only accessible from Bayocean Drive. In order to get to the scenic Cape Meares Lighthouse & Wildlife Refuge, you have to go around the other side, a 20-minute detour. That’s worth doing at least once, because the lighthouse takes a lovely photo. You can also see the Three Arch Rocks National Wildlife Refuge (a park with a fascinating history) and take your picture next to Big Spruce, Oregon’s largest Sitka Spruce.

In Cape Meares, we rested for a few days. And stopping here really lets you take it all in. Even though we were in Oregon during the peak of travel season, we still had the place to ourselves. Every morning, I walked to Kincheloe Point with my 15-year-old son, an almost four-mile round trip. On several days, we were met with fierce headwinds, forcing us to lean into the gusts as we pushed toward our goal, obscured by billows of sand.

The Cape was a launching point for several excursions to the north, including a memorable trip to the Tillamook Cheese Factory (granted, a touristy thing to do, but I’m on the road with three ice cream aficionados) and a drive to Oswald West State Park, which has a beach you can only reach by hiking through a dense temperate rainforest. This was the northernmost coastal point of our tour, but perhaps the most impressive. It almost feels as if the sandstone cliffs that used to be out in the water have come ashore to merge with the beach. All you can do is stand on the shore and say, “Wow.”

From there, we headed inland, but still followed the water. The Willamette River, which runs through Portland and merges with the Columbia River, finally spilling into the Pacific, offered a bookend to our long journey. Along its shores, we checked into the Kimpton RiverPlace Hotel, which reminded us of Oregon’s nautical heritage.

In many ways Portland follows the narrative path of the coast. It’s a place where urban and rural almost coexist, just as the cliffs and beach seem to come together on the coast. On our first evening in town, we found ourselves at Nordic Northwest, the Scandinavian heritage center, for its midsummer crawfish dinner. It’s a short drive from downtown Portland, but you feel as if you’re on a farm.

Portlanders seem aware that they, like their own coastline, are mysterious and maybe a little inaccessible — and they seem to like it that way. You can’t parachute into here in a few days and understand it. Soon, they know the warmth of summer will give way to the fog and rain that this area is known for, and the summer tourists will retreat, but that’s just fine. Maybe that is what makes this place so special.

Where to stay
Along the coast, the Salishan Spa & Golf Resort in Lincoln City has comfortable rooms that overlook the ocean. I recommend a vacation rental as you head north along the coast. They’re affordable and almost always offer excellent beach access. In Portland, besides the Kimpton RiverPlace Hotel, check out the Duniway Portland, a boutique hotel that’s close to everything and has comfortable rooms. Or consider splurging for a night or two at the Nines, a former department store converted into a luxury hotel.

What to do
Besides soak in the amazing coastline? Lincoln City has a noteworthy downtown with artisanal shops that sell collectibles. If you’re an aviation geek, check out the Tillamook Air Museum, inside an enormous hangar built to house K-class airships used during World War II for anti-submarine patrol and convoy escort. Don’t forget to check out the Guppy, an odd-looking aircraft parked just outside. In Portland, you have to check out High Hopes: The Journey of John F. Kennedy, at the Oregon Historical Society. You’ll find some rare and never-before-seen memorabilia from the 35th president.

Where to eat
This trip was all about the desserts. Along the coast, our favorite stops were the coffee stands. We became addicted to the spicy chai lattes and pastries served roadside. In Portland, check out Nordic Northwest for breakfast if you like Swedish pancakes. (And who doesn’t like Swedish pancakes?) Best donuts in town? We couldn’t stop eating those Blue Star Donuts. Don’t leave town without ordering a Passion Fruit donut.